Sanda was said to have stabbed Bilyaminu to death at their residence in November 2017.

The judge ruled that Sanda’s claim that the victim fell on a broken shisha pot during a fight was a mere smokescreen to deceive the court.

He said available evidence proved that the accused stabbed her husband with a kitchen knife with intent to ” kill and anyone who killed must be killed and must feel it blood for blood”.

Sanda was arraigned alongside her mother, her brother and her housemaid for allegedly conspiring to conceal evidence. 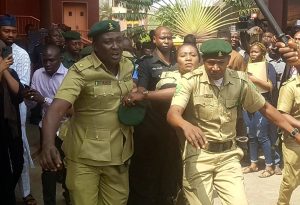 Charges against her ‘accomplices’ were later dropped leaving her to face justice.

How it all Started

According to witness accounts, a heated argument ensued between the couple on the ill-fated night over allegation of infidelity.

Sanda was said to have accused her husband of extramarital affairs and also threatened to chop off his male organ.

However, Sanda, in her testimony denied killing her husband adding that he fell on a Shisha pot when the fight ensued.

“He pushed me and as I was falling down, I mistakenly broke his Shisha bottle and the water inside spilled on the floor. He pinned me to the ground and I heard our daughter crying. I told him to leave me so that I could attend to her and he loosened up a bit and I struggled to my feet. I saw a broken bottle pricked into his chest which I removed and covered the chest with a scarf.”

Sanda said she had asked for a divorce before arguments which continued late into the night snowballed into a fight.

With no autopsy carried out on the deceased, it was extremely difficult to prove the murder charges against Sanda.

According to her lawyer, the prosecution did not only fail to prove its allegations, the medical personnel that attended to the decease were not called to ascertain the actual cause of Bilyaminu’s death.

Sanda’s lawyer also argued that the purported knife the decease was stabbed with was not tendered in court.

However, the withdrawal of three senior lawyers from Sanda’s team also dealt the chances of proving her innocence a big blow.

In a notice of withdrawal of counsel filed before the court and signed by Joseph Daudu, the lawyers said the withdrawer was made in “pursuant to Section 492(3) of the Administration of Criminal Justice Act, 2015”, the counsel asked the court to “take notice that Mr. J.B. Daudu (SAN) hereby withdraws appearance as counsel to Maryam Sanda charged as 1st defendant in this case.”

The notice by Daudu, a former president of the Nigeria Bar Association, was dated September 18, 2018.

You Have a Case to Answer

Nearly two years after the trial had dragged on, the FCT High Court dismissed the no-case submission made by Maryam Sanda

The trial judge, Justice Yusuf Halilu held that for conviction to be secured in a culpable homicide charge, three ingredients of the offence must be proven. They are: that death took place; that the death was caused by the accused person and that the accused knew that death will be the probable result of the act which led to the death. He further held that “from the evidence of all the prosecution witnesses, a thick cloud has been formed by the prosecution making it important to call the other side (Maryam) to make her case. “The submission of no-case to answer by Maryam Sanda, the first defendant, is overruled. 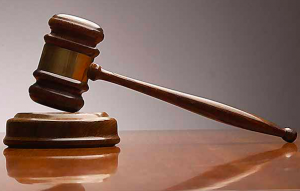 “ I call on the first defendant to enter her defence,” the judge held.

However, the court upheld the submission filed by the three other defendants and discharged and acquitted them of the offence levelled against them by the police. The judge held that “the police, either by omission or commission, have clearly not done well in tying Maimuna, Aliyu and Sadiya, to the offence of screening. “The no-case submission of the 2nd, 3rd and 4th defendants is hereby upheld and they are hereby discharged and acquitted.”

Source:ROOTSTVNIGERIA
MurderNewsSecurity
Previous articleBuhari Lives in Denial of the Cabal
Next articleBuhari’s “War” Against Corruption Has Always Been a Facade; Transparency International Merely Confirmed What Every Sincere Nigerian Already Knows
© Newspaper WordPress Theme by TagDiv