Borno State Commissioner for Information, Babakura Jato, said they had been released in three tranches since the ‘Operation Safe Corridor’ program began in 2016, with the first release in 2018.

Whilst attacks by the Boko haram insurgents continue daily unabated, the Borno State Government said about 1,400 repentant Boko Haram suspects have been released by the military and rehabilitated into society.

Jato said most of the persons released were not Boko Haram members but were relatives of terrorists or persons found in the wrong place at the wrong time.

“The total number of persons released is 1,400. Out of the 1,400, the majority of them are cleared, suspects. These were people who were suspected of being members of Boko Haram and it was discovered that they were not…..The rest are children of Boko Haram or actual Boko Haram members. I cannot give you a breakdown of the figure now for security reasons.”

Borno State Commissioner for Information, Babakura Jato, said they had been released in three tranches since the ‘Operation Safe Corridor’ program began in 2016, with the first release in 2018.

‘Sky is the limit’ for a Repentant Boko Haram 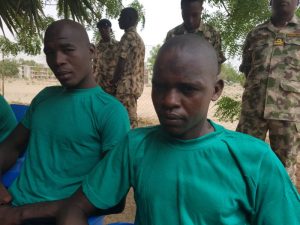 While trying to grasp the meaning of a ‘repentant Boko Haram’ in 2019, we were told by the General Officer Commanding, 7 Division, Maj. Gen Abdulmalik Biu, that repentant terrorist who lay down their arms stand the chance of becoming great in society and even emerging as the President of Nigeria.

The National Open University of Nigeria (NOUN) also revealed that ‘repentant’ members of the insurgent group, Boko Haram, have decided to enrol for degree programs in the institution.

While advocating for their rights, Former Kaduna Central Senator, Shehu Sani says repentant Boko Haram terrorists should be provided with jobs or capital to ensure they don’t return to terrorism.

The release of the former terrorists, however, did not sit well with widows of slain military officers and soldiers who protested the continuous release of murderous Boko Haram terrorists because they have repented.

Some schools of thoughts have disagreed with the timing of the release of the repentant terrorists especially when the war on terror is still ongoing.

The activities of the insurgents continue to reign supreme surprising even the grand commander of the armed forces. The decade long terrorism has taken more lives and left Nigeria with scars that lifetimes can never heal.

While our loved ones remain in their custody, less than 48 hours ago, Boko Haram killed more than 30 people kidnapping more in Auno, Maiduguri the Borno state capital. The president in reaction to the killings and abduction in Auno promised that the days of Boko Haram in Nigeria are numbered.

“The commitment of this administration to protect the lives of Nigerians will not be derailed by the cowardly and indiscriminate violence against innocent people by Boko Haram terrorists….the terrorists are clearly on a back foot and their days are numbered”. Buhari said.

From saying Boko Haram was technically defeated to being surprised by their activities, now their days are numbered…. If only words can be corroborated by actions.

Babakura Jato said he was aware of allegations that some of those released had gone back to terrorism but argued that most of these allegations were mere speculations.

Jato said after the training, they were handed over to the Borno State Government for proper integration into their communities.

He stated that if any person was rejected by his community for being a former Boko Haram member, the government would resettle that person.