some eye witness accounts disclosed that those that were attacked were those who could not get into Maiduguri on Sunday night as the gate to the town was shut against them after the 5 pm deadline.

There has not been any reaction from the Presidency and the Nigerian military 24-hours after 30 people were killed by suspected Boko Haram insurgents in a night attack at a village along Maiduguri-Damaturu Highway.

The Sunday’s attack by the insurgents also saw many others, most especially women and children being abducted as several cars and other valuable items were also set ablaze.

The Governor of Borno State, Babagana Zulum was said to have paid a condolence visit to the village on Monday morning with some eye witness accounts disclosing that those that were attacked were those who could not get into Maiduguri on Sunday night as the gate to the town was shut against them after the 5 pm deadline.

One of the villagers who spoke with newsmen said: “It is as sad as the Boko Haram seems to have targeted the people knowing that many would have to sleep in Auno as the gate to Maiduguri would have been shut against them by 5 pm.”

While the Governor urged the military to move the gate further away from the village so that it will be more difficult for insurgents to gain access into the village, he also promised that the state government will assist those whose vehicles and other valuables were destroyed in the attack.

The Attacks Persist, Will It Ever Stop?

Despite claims of victories by the Federal Government and the military in the fight against the insurgents in the North East, the recent attacks, killings, and abductions by the terror group have become unprecedented.

30 people killed by Boko Haram & many abducted in Maiduguri, Borno state today. Is the FG still claiming that Boko Haram has been "technically defeated?" How cruel & insensitive can they be & when will they live up to their duties & honor their obligation to defend our people?

According to the European Union report, close to two (2), million people have fled their homes in search of safety with about seven-point seven (7.7) million people in need of humanitarian assistance.

The European body said since 2009, more than thirty-five thousand 35,000 people have been killed and thousands of women and girls have been abducted. The conflict has led to widespread forced displacement and violations of international humanitarian law. With about 1 million children suffering from malnutrition and eight hundred thousand 800,000 children out of school.

Recently, the European Union, after a tour of the North East disclosed that the situation in the region is not improving due to incessant attacks from the terror group. 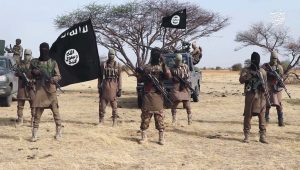 Describing his experience, the European Commissioner for Crisis Management Janez Lenarcic noted that the conflict has brought unimaginable suffering to the people of the region.

On his part, the United Nations Resident Humanitarian Coordinator of Nigeria, Edward Kallon also stated that there has been an upsurge in violent attacks from the non-state armed group.

“In recent weeks, we have seen an upsurge in violent attacks from the non-state armed group and an increasing trend of illegal checkpoints on major supply and commercial route directly targeting civilian authorities and aid workers in Borno state. Over the past year, 180,000 civilians have been forced to leave everything behind in search of safety and basic services, some of them for the second or third time. Over 1.8 million people across the three crisis-ridden states which is almost the equivalent of the entire population of Slovenia are still living in camps or hosted in other communities who are themselves becoming extremely vulnerable.” He said