How Has Boko Haram Survived Till Now, Buhari Asked

Days after declaring that the days of Boko Haram are numbered, in what dint come as a surprising move, President Muhammadu Buhari, the commander in chief of the armed forces moved the blame of the unending Boko Haram terrorism to the shoulders of the leaders of Borno Communities, wondering how Boko Haram has survived up till now.

Buhari on a condolence visit to Maiduguri over the killing of over 30 and abductions in Auno on Sunday blamed the leaders for not cooperating with the military to end the Boko Haram insurgency.

This move may not be unconnected with the reaction he got from the residents in Maiduguri who booed the president after what they considered a failure on his part to protect them from daily attacks.

After blaming the leaders, ‘disappointed’ Buhari could not take time to complete his play to the gallery as he refused to visit Auno, the location of the massacre, which is less than 20 minutes’ drive from Maiduguri airport before he departed.

It can be recalled that Buhari had ‘technically defeated’ Boko Haram, then he became ‘shocked’ at their activities, he then moved to talk tough saying their ‘days were numbered’ now he blames community leaders and wonders how they (‘Boko Haram or whoever they are’) have survived till now. What hope is there for the people? 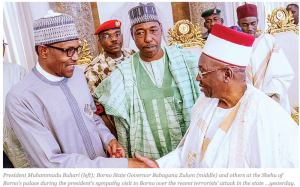 While the president visited the Shehu of Borno’s palace where he delivered his condolences and expressed his concerns over the unending Boko Haram war, the monarch, Abubakar Gabai, commended the president for cutting short his engagement in Addis Ababa and coming to commiserate with the state.

“We appeal to your Excellency for urgent attention. You have done well for us and you are still doing much for us and we appeal to you continue in that direction. The people of Borno are very grateful that you have to cut short your engagement in Addis Ababa to come and visit us,” the monarch said.

Governor of Borno state, Babagana Zulum dared to take the time to again remind Nigerians that ‘despite the killing of over 30 and abductions of many more in his state last Sunday, the situation was worse before 2015’.

The governor said he was surprised that Nigerians have “so quickly forgotten the past; some have tried to compare the situation in Borno now with what it was before the 29th May 2015 when all the major roads leading to Borno were closed except the Maiduguri-Kano road”.

The same governor, however, ate his words recognizing that…..

The military had blamed the killings of over 30 stranded travelers by members of the Boko Haram terrorists who could not gain entrance into Maiduguri on Sunday, on the travelers, whom they said defied a curfew placed on the route linking Borno and Yobe states.

“If you are going to ply the Damaturu-Maiduguri road, for a slow car, make sure you are on that road by 3 p.m. so that you can clear off before 5 o’clock. And if you are driving a big truck, make sure you have started your journey around 12 or 1 pm so that within 5 hours you have cleared the entire road. The public must understand the soldiers expected to go on night patrols in the bushes cannot again be drawn to the road to protect vehicles of people that refused to obey the law; they refused to obey rules and regulations.” Theatre Commander, Olusegun Adeniyi said.

But Governor Babagana Zulum blamed the military for its inability to protect the highway and citizens.

“Information was circulated and we got a security report from DSS that Jakana can be attacked, and they came and attacked as predicted,……Since my inauguration as the governor of Borno State from May 29th to date, Auno town has been attacked for about six times now. And the reason is that the military has withdrawn from Auno town…..We have made a repeated plea to the military to re-establish a base in Auno since it is one of the flash points of the Boko Haram, but nothing has been done to that effect.” Zulum revealed.

The House of Representatives has asked that the tragedy be investigated also calling on the president to declare a state of emergency on security. The lower chamber asked its committee on defense to investigate the cause of the low morale among troops in the North-east.

The Kaduna Attack, the Killing Continues 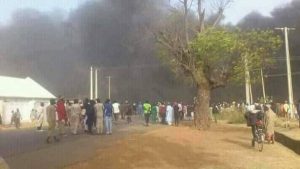 In Kaduna, armed bandits invaded Bakali Village in the Fatika district of Giwa Local Government Area, and eleven members of the same family were locked up and burnt in their house.

A community leader and head of the family of the burnt 11 victims in Kaduna, Sani Bakali, told reporters that the gunmen stormed the village around 4:00 p.m. on Tuesday and operated for two hours. He said…

“The bandits stormed our village on several motorbikes, brandishing their AK47 rifles. Immediately they came, they started moving around the village, shooting sporadically. In the process, they came to our house and set it ablaze, with 11 people inside. All 11 people were members of my family. They included three women and eight children, who were wives and children of my three younger brothers.”

How many states of Emergencies do we need to declare with a seemly clueless security leadership?