Buhari Talks Tough on Boko Haram for the Umpteenth Time

President Buhari at a different location has again said his administration is fully determined in defeating terrorism.

“We are fully determined to combat and defeat all acts of criminality, banditry, and terrorism in the country”. Buhari said.

The president who is currently in Addis Ababa, Ethiopia while meeting with the executive committee members of the Nigerian Community in Ethiopia (NICE) assured Nigerians at home and abroad that their protection would continue to remain a key priority of his administration.

This is in spite of the daily attacks leading to deaths and abduction in the country and the government ignoring Nigerians stranded in Coronavirus ridden Wuhan, China.

Barely 24 hours ago, had the president warned that the days of Boko Haram in Nigeria are numbered following the killings of over 30 and abductions in Auno on Sunday 9th February 2020.

“The commitment of this administration to protect the lives of Nigerians will not be derailed by the cowardly and indiscriminate violence against innocent people by Boko Haram terrorists….the terrorists are clearly on a back foot and their days are numbered”. Buhari said.

The Nigerian Elders Forum that had been loyal troops of the president seem to have heard enough of Buhari’s promises hence passed a vote of no confidence on him over the rising insecurity in the country.

Despite calls for his sack by the opposition, the presidency though once surprised by a ‘technically defeated’ Boko Haram is back to talking tough on dealing with them.

Buhari also had a message for Nigerians in Diaspora.

Diaspora Voting? Can Nigeria Achieve This? 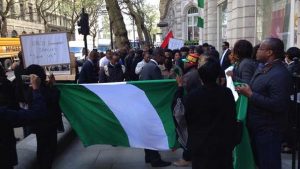 Following calls by several Diaspora groups and associations, Nigerians in diaspora may soon have the opportunity to vote as President Buhari while in Ethiopia also revealed that if the National Assembly passes the relevant laws to give legal backing to Diaspora voting, he is not against it.

“I have said it severally that I am not against it (Diaspora voting). However, you will need to convince the National Assembly to amend the relevant laws to make Diaspora voting a reality.” Buhari said.

The presidency in 2019 despite acknowledging the $22 billion contributions Nigerians in Diaspora contribute, said the exercise will only be accommodated after 2019.

The Independent National Electoral Commission had also urged the National Assembly to expedite action by amending sections of the Constitution and the Electoral Act (2010 as amended) to make way for Nigerians living outside the country to participate in the electoral process and vote.

The law as it stands at the moment, says that you can only vote where you are registered

Though some schools of thought have argued “Diaspora voting” will open a floodgate for more election malpractices, and drown INEC, the bulk now rests solely is on the shoulders of the National Assembly.