In less than 24 hours after President Buhari departed Maiduguri, the Borno state capital, leader of the Boko Haram terrorists, Abubakar Shekau said he would attack Buhari if he returns to Borno…

“Buhari came to Maiduguri pretending to be a good man. He shouldn’t try it again,” Shekau said in Hausa.

The terrorist reminded the president that its sect is fully on ground in the north-east.

Buhari had visited Borno from Addis Ababa on a condolence visit over the killing of over 30 and abductions of many in Auno on Sunday where he blamed the leaders of the communities for not cooperating with the military to end the Boko Haram insurgency.

Barely 48 hours ago, had the president warned that the days of Boko Haram in Nigeria are numbered, but he noticeably ignored Auno, the location of the massacre, which is less than 20 minutes’ drive from Maiduguri airport.

In his last message in October 2019, the Boko Haram leader had said none of his members was tired of fighting and that they would continue fighting till their last breathe. In 18 minutes audio message, Shekau faulted the Borno governor’s appeal that insurgents should lay down their arms and embrace the government’s amnesty program.

The fate of Chibok Girls…Almost Six Years on, Over 100 Girls Still Missing 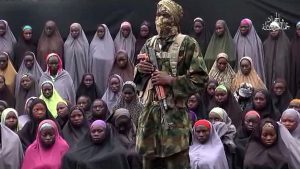 In a video, Shekau reportedly said the over 100 students from Chibok remaining in its detention since 2014 will only be released if the federal government let go of the sect members currently in detention.

On the night of 14th April 2014, in the first frantic minutes of their ordeal, 57 girls managed to jump from the trucks in which they were transported and escaped. The remaining 219 were taken away by the fighters. Over the years, a total of 164 girls have been found or released as part of a deal between the Nigerian government and the armed group.

Members of the Chibok community had recently revealed that they are being targeted for ‘annihilation’ by Boko Haram. They also accused President Buhari of failing to fulfil the promise made to them in January 2016 to set up a panel that will ‘further investigate’ the abduction of the girls.

At least 20 parents of the abducted school girls have died from trauma and violence since the tragedy.

Sadly, the once loud local and international attention has died down as the girls remain in Boko Haram custody 6 years later and many more have been abducted.

Just last Sunday 30 people were killed and many abducted when Boko Haram attacked passengers in Auno, who could not gain entrance into Maiduguri. After the attack, the military had blamed the killings on the travellers, whom they said defied a curfew placed on the route linking Borno and Yobe states.

But Governor Babagana Zulum blamed the military for its inability to protect the highway and citizens.

The military and the government of the state have not been seeing ‘eye to eye’ on the deteriorating security situation in the state. The governor of the state had once accused the military of exploiting commuters by demanding one thousand naira per vehicle at security checkpoints.

From almost cutting off Borno state from the rest of Nigeria due to daily attacks on the once single safe route in and out of the state, the decade long terrorism in the state has continued to take a downturn.

The House of Representatives had called for the declaration of a state of emergency on the security situation in the country. But they had once called for the sack of the service chief too and nothing was done about that.

For how long will the terrorists be this daring and hold the security leadership of Nigeria to ransom?