She warned that the proceedings would not continue if the prosecution fails to present evidence of the payment of the N200, 000 to the defence or come to court with the cash on Thursday.

The Federal High Court in Abuja on Wednesday fined the Federal Government the sum of N200, 000 for seeking and causing an adjournment of the trial of Omoyele Sowore.

The Court said it has awarded an N200, 000 damages against the Department of State Security (DSS) payable to the convener of #RevolutionNow protest, Omoyele Sowore. The damages were awarded for frivolous adjournments.

The presiding judge, Justice Ijeoma Ojukwu described the prosecution’s request for the adjournment as uncalled for. The fine must be paid by the Federal Government between now and tomorrow, the new date for the continuation of the trial is adjourned till February 13.

She warned that the proceedings would not continue if the prosecution fails to present evidence of the payment of the N200, 000 to the defence or come to court with the cash on Thursday.

The judge also expressed disappointment with the prosecuting counsel, Kayode Alilu who failed to serve all necessary documents as ordered by the court over seven weeks ago.

The prosecuting counsel from the office of the Attorney-General of the Federation had earlier explained to the court that the amendment of the charges followed the taking over of the case from the Department of State Service (DSS) in December.

The Defence lawyer, Yinka Olumide-Fusika (SAN) of Femi Falana chambers contended that the prosecution was not prepared for trial and urged the court to strike out the charges.

He said the prosecution’s request for an adjournment should be declined because it indicates their lack of diligence in the prosecution of the case. He added that the prosecution is only interested in the drama after arraigning the defendants since August 2019.

Alilu in his response to the defense lawyer asked the court to discountenance the application to strike out the suit and urged the court to grant an adjournment till Thursday to enable them effect service of the amended charges on the defendants.

MrOmoyele Sowore’s Lawyer counters the argument saying the prosecution is not in a position to continue the matter on Thursday as they are yet to serve them the list and statements of their witnesses despite the order of the court to do so. 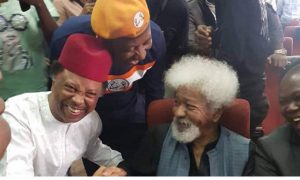 Prof. Wole Soyinka, former Chairman of the Council of the National Human Rights Commission (NHRC), accompanied by Prof. Chidi Odinkalu and a former Senator representing Kaduna Central, Shehu Sani were at the Federal High Court in Abuja on Wednesday to witness proceedings at the resumed hearing in the trial of the convener, RevolutionNow, a protest against alleged bad governance in the country.

Soyinka was in the court ahead of the proceedings that commenced around 10 am on Wednesday.

Sani, who is also facing a fraud-related charge before another judge of the Federal High Court in Abuja, on entering the courtroom, went to where Soyinka sat, greeted him, and whispered something into his ears, which made them laugh. Sani then proceeded to settle on a chair behind Soyinka.

#RevolutionNow Protest, Sowore, and Bakare charged with a treasonable felony 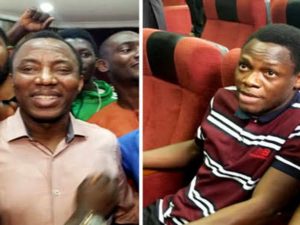 Sowore and his associate, Olawale Bakare, were arrested in August last year in respect of the #RevolutionNow protest and were held in the custody of the Department of State Services (DSS) for months until their arraignment towards the end of the year.

Youths and facilitators under the auspices of the Global Coalition for Security and Democracy in Nigeria on Monday, August 4, defied threats of security agencies to hold the ‘Revolution Now’ protest in four states of the country and Abuja. States, where the Revolution protests took place, are; Lagos, Osun, Ondo and Cross River.

It would be recalled that on Saturday, August 3, the State Security Service arrested the publisher of popular media organization Sahara Reporters, Omoyele Sowore.

The SSS said Sowore was arrested for calling for a revolution against the present administration.

Sowore who contested for presidency in the 2019 general election in series of recent video clips decried the governance pattern of the present administration. 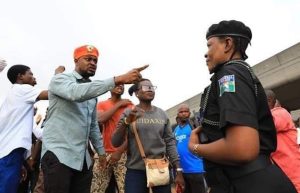 Meanwhile, the Nigeria Police also warned that Revolution Now protesters would be made to face the wrath of the law. Despite the threats, several Civil Society Organizations (CSO) maintained a ‘no-going-back’ stance despite Sowore being in detention and the warning from police.

The protesters said their demands had been broken down into three phases, each of which contains issues that must be addressed.