AI VS Military: What Are The Troops Really Doing in the North East?

The decade long fight against insurgency in Nigeria has put every sector at their wits end, from the Presidency threatening that their days are numbered to the National Assembly demanding a state of emergency, the opposition calling for the resignation of the ruling government and even the Terrorist themselves daring Nigeria’s commander in chief to come to their base.

The major defense of the country, the Nigerian Army is the worst hit as it has seemingly been thrown into confusion. From allegedly fleeing the scene of an attack in Auno despite a three hour security report warning them of the attack to the statement by the Chief of army staff, Lt. General Tukur Buratai that Insurgency has been defeated and Nigeria is only left with the problem of Terrorism. It is clear that they have lost it!

Can the Army chief explain to the families who have lost their loves ones the difference between Insurgency and Terrorism?

Only these broken lives can attest that Boko Haram is as active as active can ever be.

You, I and the Army Chief have no clue, not one!

Today, we wake up to claims by the Amnesty International that the Nigerian military is deploying unlawful tactics, including the forceful displacement and detention of villagers in its purported fight against insurgency in the North-East.

AI alleged that the Nigerian military burnt three villages and detained six men from the displaced villages at Maimalari military barracks in Maiduguri for about a month after which they were freed without any charge, thereby violating international humanitarian rights

“These brazen acts of razing entire villages, deliberately destroying civilian homes and forcibly displacing their inhabitants with no imperative military grounds, should be investigated as possible war crimes…..They repeat a longstanding pattern of the Nigerian military’s brutal tactics against the civilian population. Forces allegedly responsible for such violations must be suspended immediately and brought to justice.”

Residents of Bukarti, Ngariri and Matiri villages alleged that the soldiers arrived on Friday, January 3, 2020, and “went house to house and to surrounding farmland, forcing everyone to gather under a tree and by a graveyard” after which they were forced to board large trucks and saw them burn their villages…..”The trucks then took more than 400 women, men, and children to an internally displaced person’s camp near Maiduguri.”

AI said the displacement of the inhabitants of these villages, where their security or imperative military reasons did not demand so, constituted a war crime, adding that the subsequent burning of their homes might amount to a war crime as well. 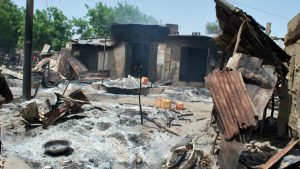 These allegations reminds us of similar one made by the Governor of Borno State, Babagana Zulum who insisted that the military stop the evacuation of residents from their villages to IDP camps.

Zulum saw the operational plan of relocating residents to IDP camps as a rash one arguing that evacuation the villages was as good as shutting down and militarizing the Maiduguri-Kano road, which is the state’s only link to Borno.

The governor had also accused the army in a viral video of exploiting the people by collecting one thousand naira per car at security check points.

While security measures are not being questioned, evidence indicts the military like the statement by the Borno State Commissioner for Information, Babakura Jato that most of the 1400 people released by the military were not Boko Haram members but some were persons found in the wrong place at the wrong time.

“The Nigerian government must not brush these violations under the carpet. They must be investigated, and alleged perpetrators must be prosecuted. Necessary steps must also be taken to ensure that military operations do not further forcibly displace civilian populations,” Ojigho added.

While there has been pressure on the troops to deliver peace to the country as is expected, do we allow them become monsters to seemingly achieve results? 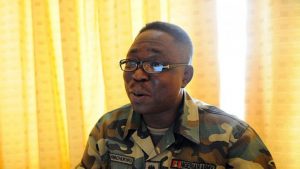 Amnesty International has been accused by the Defence Headquarters of deliberately supporting the acts of terrorism perpetrated against Nigeria by the Boko Haram and the Islamic State of West African State (ISWAP) terror groups.

Acting Director of Defence Information, Brigadier General, Onyema Nwachukwu, in a statement, issued a strong warning to the group to put an end to its reckless misrepresentation of facts in its bid to meet the expectations of the people who “patronize” by undermining Nigeria’s Military campaign against terrorism in the North East”.

“The Defence Headquarters (DHQ) has taken cognizance of yet another falsified report by Amnesty International (AI) in a campaign of calumny targeting the Nigerian Military and deliberately supporting the callous acts of terrorism perpetrated by Boko Haram Terrorists (BHTs) and Islamic State of West African Province (ISWAP).

“This inglorious campaign is contained in a recent report alleging the employment of unlawful tactics of razing down villages and unlawful detention of locals by troops. This is line with the AIs’ usual mannerism and tenacious efforts aimed at disparaging the Armed Forces of Nigeria (AFN).

“The Defence Headquarters wishes to state unambiguously that the allegations being touted by AI are nothing but a betrayal of its lack of in-depth knowledge of the goings-on in the North East (NE) theatre of operation”.

“It is expedient to state that troops of Operation Lafiya Dole who are conducting Counter-Terrorism and Counter-Insurgency Operations in the NE do not employ arson as an operational tactic. It is a well-known fact, going by the modus operandi of BHTs that they have more often than not engaged in the atrocious acts of looting and burning of villages, as well as destroying infrastructures.

“It, therefore, beats one’s imagination that AI is attributing these atrocities to AFN troops who are legitimately defending the country guided by extant rules of engagement and operational codes of conduct.

“AI must understand the fact that Nigeria is at war against terrorism in the NE and that the troops have a constitutional mandate to protect lives and property, even if it means conducting an evacuation to save and secure lives of civilians in the conflict. Protecting civilians by evacuating them from the line of fire during combat is not a violation of the international law of conflict or a war crime.

“It is rather a commendable effort by the troops to prevent collateral damage during combat. Our troops should, therefore, be commended for making deliberate efforts to evacuate civilians to protect their lives and property.

“It is also crucial to point out, that troops deployed to fight terrorism in the NE do not attack or raze down villages, communities or settlements, rather they launch an offensive on terrorists’ camps, enclaves, and hideouts.

“Based on actionable intelligence, persons who provide logistics and other forms of support to the terrorists are arrested and subjected to a thorough investigation by a combined team of professionals drawn from the intelligence community of the Armed Forces and other security agencies. Anyone not found culpable is not held in custody for further investigations.

“AI must, therefore, put an end to its reckless distortion of facts in its desperate bid to satisfy its puppeteers by undermining Nigeria’s Military campaign against terrorism in the NE.

“We urge members of the public to please discountenance AIs report, as it is not a true and realistic reflection of troops’ counter-terrorism operation in the NE”

What is the Military Really Doing in the North East?