The latest in Nigeria’s negligence profile was seen when lawmakers in the House of Representatives unanimously shut down a motion that suggested Nigerians in China be evacuated back home and quarantined.

Since China quarantined its mainland areas, due to the outbreak of the Coronavirus, over 65 Nigerians had been stranded in these areas.

China’s National Health Commission revealed that the death toll in mainland China is well over 800, with 37,198 infections confirmed. While over 28 countries have recorded confirmed cases.

While over 25 countries have evacuated their nationals from mainland China and are helping in quarantining them, Nigeria, on the other hand, denied that Nigerian National reached out to them for evacuation, as the Lagos state governments ask passengers from Asia to quarantine themselves for 14 days.

The latest in Nigeria’s negligence profile was seen when lawmakers in the House of Representatives unanimously shut down a motion that suggested Nigerians in China be evacuated back home and quarantined.

“The Nigerian community in China has expressed shock and disappointment in the members of House of Representatives for trivializing the ordeal of over 60 Nigerians stranded in the coronavirus-hit city of Wuhan in China following a motion by one of the lawmakers calling for necessary actions by the Federal Government to ensure that those Nigerians returned to their fatherland….

It is unfortunate that rather than attracting a sober reflection and robust deliberation from the lawmakers, the motion became the object of mockery by those who swore to an oath to ensure that their official conducts were in the best interest of Nigerians. ” Nigerian in China, Nnamdi Onwuka said…

In a viral video, the lawmakers were seen in a rowdy session shouting down the speaker of the house and the mover of the motion.

Onwuka was also disappointed in the Nigerian Ambassador to China, Ahmed Jidda, who donated 20,000 Yuan (about N1m) to them.

He, however, expressed gratitude to the government and citizens of the People’s Republic of China for their concerted efforts to ensure that everybody in the virus-hit areas was taken care of, irrespective of their nationality or religion.

Despite denials and mockery, Onwuka insisted that they have to be evacuated back home…

“We reiterate our call for the immediate evacuation of our compatriots in Wuhan as government officials have repeatedly told the world that Nigeria has the resources to quarantine returnees as it did during the outbreak of Ebola.”

Chinese National Health Commission said on Sunday that it had received reports of 37,198 confirmed cases of coronavirus and 811 deaths on the Chinese mainland, with 2,649 patients cured and discharged. 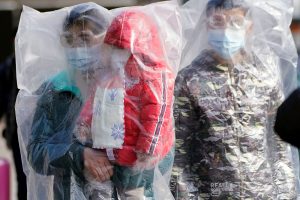 This figure supersedes the 2003 death toll of 774 after the severe acute respiratory syndrome (SARS) outbreak in more than two dozen countries.

The commission noted that 189,660 persons were under medical observation, “having had close contact with infected patients.”

Chinese Press Officer, Sun Saixiong, said that there had been global health disasters in the past, which were taken care of and it was improper for anyone to “demonize a Chinese person” because of the virus.

“Ebola outbreak in West Africa Sierra Leone, Guinea and Liberia and little in Nigeria and Mali in 2013 with fatality rate of 40 percent and total deaths of 28,616; If the world had seen disasters and stood with the affected countries, not declaring citizens of the countries outcasts from the rest of humanity, why demonize the Chinese over coronavirus? Let’s stand with humanity like ever before by standing with China, especially the Chinese person,” Saixiong said

Minister of Health, Osagie Ehanire, said on Sunday that the level of preparedness of Lagos State would help to contain the disease outbreaks in the country. 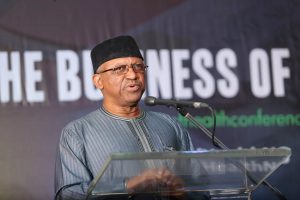 “I can say that Lagos is very prepared with a high level of readiness and awareness coupled with competent health personnel available. A lot of lessons have been learned from the Ebola outbreak of 2014, so I’m confident that Lagos is ready. They have the highest volume of air travel, the preparedness in Lagos is more important than anywhere else in the country.” Ehanire said.

While state Commissioner for Health, Akin Abayomi, in the same breath where he said: “We are ready in Lagos and if anything comes, we have got the facility, trained staff, a robust surveillance system in the state” also said travellers returning from China and any country where cases of coronavirus have been advised to observe self-quarantine on arrival in Lagos.

“You are required to restrict your movement to your home, monitor yourself closely, report any symptoms that may develop to the Ministry of Health on the contact numbers provided and engage in good personal hygiene,” Abayomi said.

However, Ebonyi State Governor, David Umahi, is proactive and has directed that all Chinese nationals working in various construction sites should submit themselves for medical examination on arrival in Ebonyi.

Just last week, the senator representing Anambra South, Ifeanyi Uba warned that while China is seeking a protective face mask from Nigeria, Nigerians are exporting it illegally to its detriment. 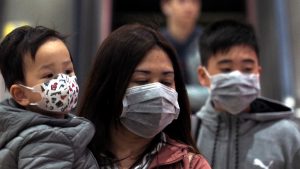 “Over the last three weeks, face masks have become the most sought after commodity in Nigeria. With over 100 million face masks being unpatriotically exported to Asia using Murtala Mohammed Airport and Port Harcourt International Airport…

Worried that Nigeria is at a brink of an imminent outbreak given our massive population and frequency of travel and with the booming shortage of protective surgical face mask, we may be on our way to creating a devastating global situation,” Ifeanyi Ubah said.

While the Presidency remains silent on this fast-spreading deadly virus, Nigerians are warned to be more cautious.