The National Executive Council Meeting (NWC) of the All Progressives Congress (APC) scheduled for Tuesday, 17th of March, 2020 has been cancelled by President Muhammadu Buhari.

The planned meeting was summoned by the party’s Deputy National Secretary of the party, Victor Gaidam.

Announcing the postponement, the Chairman of the Progressives Governors Forum and Governor of Kebbi State, Atiku Bagudu stated that the NEC meeting had to be postponed as directed by President Buhari after a closed-door meeting with the APC Governors.

The planned meeting was postponed hours after the Appeal Court adjourned indefinitely, the hearing of the suit filed by the embattled APC National Chairman, Adams Oshiomhole challenging his suspension by the FCT High Court.

Oshiomhole and the Burden of Leadership

On 23 June 2018, the Former Chairman of the Nigerian Labour Congress and the two-term governor of Edo State, Adams Oshiomhole emerged as the national chairman of the All Progressives Congress (APC) following a voice vote by delegates at the party’s National convention in Abuja.

Barely five months into his leadership as the party chairman, Oshiomhole was caught up in the web of crisis with some of the governors of over the party’s primaries. Leading the Oshiomole-must-go campaigners then were Former Governors, Rochas Okorocha, (Imo), Ibikunle Amosun (Ogun), and Abdulaziz Yari (Zamfara State). They all put up arms against Oshiomhole over the outcome of the party’s primary elections for various positions ahead of the 2019 general elections. 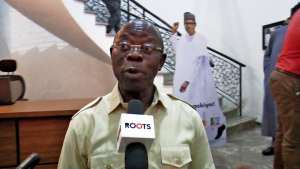 The in-fighting between Oshiomhole and the former governors led to the party losing out in Zamfara State while the anointed candidates of Amosun and Okorocha also failed to clinch the gubernatorial seats in their respective States.

Oshiomhole is also enmeshed in a corruption scandal which is now the subject of litigation at an Abuja High Court as his accuser sought the order of the court to compel the Economic and Financial Crimes Commission, EFCC, to invite and investigate a petition which had been gathering dust on its shelf for over two years.

The crisis that is rocking the APC over Oshiomhole’s fate has polarised key organs of the party, including the Progressive Governors Forum (PGF), the National Working Committee (NWC) and the Forum of State Chairmen of the party.

On March 4, 2020, Oshiomhole by the FCT High Court following an application filed by the deputy chairman of the party (North-East), Mustapha Salihu, and five others through their lawyer, Oluwole Afolabi

They challenged Oshiomhole’s continued stay in office after his suspension by his ward in Edo State.

However, Oshiomhole also secured a favourable judgment through a Federal High Court in Kano which gave a counter ruling that the status quo be maintained and Oshiomole remains as National Chairman of the APC.

A few weeks ago, the APC National Executive Committee (NEC) had opted to restore sanity in the party by setting up a reconciliation-committee headed by the former interim chairman of the party- Chief Bisi Akande. The panel has the sole function of meeting with and attempting to assuage aggrieved members to see reasons to work for the good of the party by settling their issues amicably with those, they had issues with.

However, the number of court cases instituted by the warring parties has gotten the Akande’s led committee infuriated.

Akande said the actions of those going to court are harmful because of how court decisions are rendered.

“I do not know the motivations behind this litigious conduct. It is not in my nature to ascribe negative or harmful motives to anyone. Those seeking access to the courts to decide what politic questions perhaps think they are doing the right thing. If this is the case, I must state that they are innocently in error.

“Their actions are harmful to the party in compound ways. First, the subject matter they bring before the court is not amenable to judicial pronouncement… one side wins, the other loses, is not the best way to resolve political disputes…” Akande said in a statement.

Bola Tinubu, the National Leader of the ruling All Progressives Congress (APC) also broke his silence over the lingering crisis rocking the APC.

Tinubu in a statement on Sunday threw his weight behind Oshiomhole saying those against him were plotting against him to secure safe landing for their 2023 Presidential ambitions.

He absolved Oshiomhole of his alleged sins saying he was human and bound to err.

“While Corona has been presently contained in Nigeria, we must be alert to another sickness that seems rampant within a certain segment of society. That sickness is old Ambition-virus 2023. This illness afflicts many in the political class along with their allies in the media.

“The more a person obsesses over and constantly engages in political manoeuvring is a warning sign. Not only is he prone to the 2023 virus. He likely has little to offer in the way of good governance. He wants to hold public office that you might serve him not he serves you. For if he had adequately studied and been acquainted with the ways and means of progressive governance, he would be focused on that important task at the present moment. He certainly would not drown himself and all around him in harmful political intrigue.

“It is against this backdrop that we should view the present ploys and plots to undermine the APC National Chairman. The Chairman is human; thus, he has his merits as well as his flaws. Yet his humanity cannot be grounds for his dismissal. If so, the position will forever go vacant.

GovernanceMuhammadu BuhariNews
Previous articleWadume Trial stalled as Army Failed To Provide Indicted Captain, Others
Next articleAbule Ado Explosion: It Is About Time Someone Is Held Responsible For An Avoidable Tragedy
© Newspaper WordPress Theme by TagDiv