How bad could the coordination of the military’s operation in the North-East be when soldiers on the front line are dropping their weapons and saying they no longer have the morale to face the insurgents that have ravaged the region for over ten years?

One may beg to ask,

Is Nigeria moving forward or backward in the war against the Boko Haram insurgents?

What is the true picture of the situation of things even after the military claims to have decimated the terrorists, with only pockets said to be hibernating in the enclave?

While the military authorities always have a tale of victories to tell about the decimation of the dreaded group, frequent counter attacks by Boko Haram and ISWAP elements in quick successions have often put doubts in the minds of many of the victory claimed by the military.

News headlines have it that over three hundred and fifty soldiers on the frontline of the war wrote to the Army Chief Tukur Buratai, on July 3 2020 under reference NA/COAS/ 001 for voluntary retirement on grounds that they have lost interest in the Army. Out of the 380 soldiers on the list of voluntary disengagement, 356 stated that the job of defending the territorial integrity of the nation, no longer interests them, while 24 stated that they had been appointed traditional rulers in their localities.

The disengagement of the soldiers was however approved by Buratai in a 17 paged circular, notifying the Theater commands Operation Lafiya Dole, various divisions and formations in Borno state.

According to Punch Newspaper, majority of the soldiers applying for voluntary disengagement and citing loss of interest are stationed in the North East. They are within the ranks of Master Warrant Officers, Warrant Officers, Staff Sergeants, Lance Corporal, Corporals and Privates.

It has also been speculated that the loss of morale on the part of the men is owing to allegations that the soldiers do not possess sophisticated weapons, little or no allowances and the continuous killing of soldiers by Boko Haram insurgents.

In 2020 alone, soldiers on assignment and missions in the North East have suffered several ambushes from the Boko Haram fighters resulting in several fatal casualties.

The Defence Media Operations, through its Coordinator, Major General John Enenche disclosed that 47 soldiers were killed by a bomb explosion in Gorgi, an act perpetrated by Boko Haram. Similarly, in March 2020, three soldiers were confirmed dead in Damboa attack.

While the source of weapons of the Boko Haram is still a puzzle to be unraveled, the attack on the 156 Battalion in Mainok which led to the killing of five soldiers, leaving others injured shows there seems to be no hope for displaced people to live a normal life anytime soon. 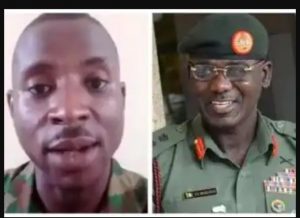 Soldiers continue to weep on the battle field cursing the Chief-of-Army Staff, Tukur Buratai in several videos which have since gone viral. In June 2020, Lance Corporal Martins in a twelve minutes video expressed displeasure at the security chiefs, while calling out Buratai and the Chief of Defence Staff, General Abayomi Olonisakin, over their failure and lack of commitment to putting an end to the consistent killing of Nigerians by terrorists and armed bandits. Just as he alleged the illegal detention of soldiers who requested for better weapons and ammunition to fight Boko Haram. After the video had made the rounds, Lance Corporal Martins, was reportedly arrested by senior military officers.

Why The set Back?

Some Nigerians hold the belief that the authorities have failed to give the true situations at the war front and that the battle is not won yet, but the military is giving the impression and hiding under the guise that the war had been won.  They say the picture the military is painting is confusing and not the true reality of the situation on ground. Soldiers in time past are said to have been denied their welfare packages, lacking sophisticated equipment to conquer the enemies of the state.

There has also been reports of lack of synergy between security personnel, especially the Nigerian Army and the Nigerian Air Force, because a particular arm of the Military wants to take the glory.

With claims of victory by the Military Hierachy, there are increasing and continuous attacks on people in these three states, Yobe, Borno and Adamawa, which have become the worse hit to date. The attacks suffered by people in the Northeast have made the European Union extremely worried about the challenges faced by civilians and aid workers. The EU holds a different narrative saying the situation of things has not changed for the better, as the killing of aid workers and rising tensions in the region are still too frequent for security agencies to sleep with their two eyes closed. 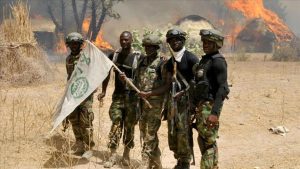 It remains a popular believe that the Nigerian government is still prosecuting the fight against insurgency with no intention to ending it soon. Till date, many still ask why the Federal government would give Amnesty to some Boko Haram insurgents; fly them in private jets while the victims of their atrocities rot in various IDP camps across the country.

Is Buratai still in the North East

Has Buratai’s presence improved the fight against the terrorists? On April 11, 2020, the Chief of Army Staff, Tukur Buratai announced his relocation to the North-East to oversee the fight against insurgency in the region after a widely publicized and praised offensive against the terrorists on the banks of Lake Chad led by Chadian President, Idriss Deby.

It however remains a puzzle that despite Buratai’s presence in the volatile region, the Nigerian troops still continue to receive bashing from the insurgents, losing many previously gained grounds to the control of the terrorists.

The former theater Commander Operation Lafiya Dole Major General Olusegun Adeniyi, had earlier said that if helicopters were acquired it will help scale up the fight against insurgency. This disclosure confirms speculations that Boko Haram insurgents could be wiped out if the right amenities were put in place.

“The only thing I know needs to be given to the Army now is Nigerian Army aviation. There is a way you solve a problem, it will change the game. Army needs combat helicopters, to end Boko Haram war. If we have it, it will not be deployed as the Air Force asset. Air Force asset are for bigger strategic roles. These helicopters will sleep with us; they will stay in the frontline. So the helicopter and the riffle and the tanks will be together. I know this has been on the table for years, when this is done Nigeria can forget about Boko Haram”.

General Adeniyi’s wailing confirms what many Nigerians have always suspected about the insurgents and the war. From the clips, it shows, there is no synergy between the Army and Air Force. The Air Component as required by rules of engagement is supposed to offer support to the land component. One may beg to ask, Why the call to allow the Army operate fighter jets has not been acceded to, as the synergy between the Army and the Air Force seems to be delayed.

Does this mean the Air Force seem to be working at its own pace?

Is this a deliberate attempt?

Perhaps Adeniyi’s stance may just be the way out of the decade long travail of Nigeria as a nation.

The question that is perhaps on the lips of many is, “Where is the political will to eliminate the non-state actors who have been enemies of Nigeria for over a decade?” Why is there no determination by political gladiators and those handling the machinery of government, to save Nigeria even if it means hurting the movers and shakers in the political class, said to be the brain behind this disaster?

Has the Government been sincere about ending the war?  Some opine that there is no sincerity due to allegations of financial gains being garnered from the decade long war. There have also been insinuations that Boko Haram has become an easy cash cow both locally and internationally. The rehabilitation and re-integration of repentant Boko Haram is said to be a conspiracy theory and shows that those in power are not truly ready to bring the war to an end.