#ENDSARS: Chairman of RootsTV Nigeria calls participation in ongoing protests a “moral obligation,” says the youths are only trying to save Nigeria

15.10.2020
Facebook
Twitter
WhatsApp
Dumebi Kachikwu, Chairman of RootsTV Nigeria has again called for wider support for the ongoing nationwide protests targeted at ending police brutality in the country.
In a message on his Twitter handle @DumebiKachikwu, the social commentator and crusader said that the protests represent sacrifices by the youths to save our country.
According to the media mogul, “we are all youths,” suggesting that participation in the protests must go beyond demographics. 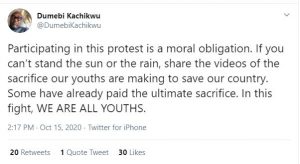 The tweet read: “Participating in this protest is a moral obligation. If you cannot stand the sun or the rain, share the videos of the sacrifice our youths are making to save our country. Some have already paid the ultimate sacrifice. In this fight, WE ARE ALL YOUTHS”
Kachikwu had in a broadcast on Wednesday warned against the use of force on the protesters, advising the president, Muhammadu Buhari to engage the youths constructively and seek ways of meeting the central demands which he believes is centred around good governance arguing that it would be foolish for anyone to assume that the protests are entirely about SARS brutality alone.
He warned that the likely conflagration arising from a mismanagement of crises could consume Nigeria- starting with the elites.
Source:ROOTSTV NIGERIA
NewsOpinion
Previous article#EndSARS receives huge boost as Twitter founder endorses movement, shares links for donations as FlutterWave shuts down platform, claiming donations to protesters came from “questionable sources”
Next articleLegal luminary, Kayode Ajulo writes Buhari, recommends ways of resolving #ENDSARS protests, ending police brutality
© Newspaper WordPress Theme by TagDiv