04.08.2020
Facebook
Twitter
WhatsApp
Many of the political parties have been de-registered and we as members of the steering committee have a right to know of any press statement or if any of our member wants to go to court. We are not aware of anybody going to court, we never took the decision that we will sue anybody. 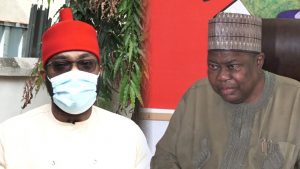 The National leadership of the Labour Party has dissociated itself from the suit filed by the Coalition of United Political Party (CUPP), against service chiefs, saying it is geared towards making a mockery of the judicial process.
It will be recalled that on the 28th of July 2020, the opposition coalition announced through it spokesman Ikenga Imo Ugochinyere, that it had commenced legal process to remove service Chiefs who have over stayed their welcome, from office.
The CUPP Spokesman told newsmen in Abuja that the move to sack service chiefs was born out of what it termed as ”a patriotic effort to drag Nigeria out of the dungeon where President Muhammadu Buhari led administration has dumped it by the regime’s unprecedented incompetence, clueless-ness and misrule”.
However the Labour Party one of the political parties which makes up CUPP has express displeasure at the move by CUPP. The Labour Party Chairman Abdulsalam Abdulkadir while briefing journalists explained that  the decision of the coalition was not borne out  of consultations among members but a decision exclusively that of Ikenga Imo Ugochinyere.
“This habit therefore begs the question why he does not use his own Political Party, rather than an organization comprising other political entities. An individual should not and cannot continue to act in the interest of the whole without due consultation and approvals,
I want to state categorically, as a formidable stakeholder in CUPP that I am against the action of suing the Federal Government on the issue Of the continuous stay of the service chiefs. Let me also state that and the Labour Party do not support the Federal Government’s decision to continue to retain the Service Chiefs in the face of rising insecurity in the North East and other parts of the country but we would not also allow ourselves to be dragged or become a party to a circus suit aimed primarily an individual’s quest for popularity and misplaced political relevance rather than at exacting justice for the Nigerian people.”
Abdulsalam Abdulkadir, while explaining how the CUPP came about said the current coalition is misrepresent the stance of parties that makes up the CUPP. He however stated that Federal Government seem to be loosing control of the security situation and should find a lead way into the security architecture.
“In the build up to the 2019 general elections, some Party Leaders came to the realization that defeat the ruling Party, particularly we had to come together and join forces with other well meaning and progressive political interests. After series of meetings and consultations the CUPP launched. 1 and. twelve other members made ‘ the, Steering Committee, which is-the ‘highest representative body of the organization, saddled with running the affairs of the Grand Alliance.
I and other members of the Grand Alliance have watched with dismay how some persons who are not members of the Steering Committee have run away with the an organization that is meant to represent a coalition of over seventy individual political interests, without recourse to the Steering Committee or the sensibilities of other partners. This has gone on for a long time in spite of concerted and concerned calls from all and sundry. The CUPP is made up of mature, respectable and responsible individuals and entities, which may explain why a lot of restraint- have been. exercised and members have been refrained from having a public showdown”.
The Labour Party states; though it is an opposition Party and a standing member of the CUPP, “the law suit, no matter pleasing it sounds, is not geared toward yielding a decisively positive result in courts, but is geared towards making mockery of the judicial processes, saying it will not be a party to reducing national institutions into a mere circus.
I distance myself from the law suit. We cannot embark on a ludicrous journey aimed at taking undue advantage of our judicial process”.
As at the time of filing the report, the spokesman of the CUPP is yet to react on matter.
Source:ROOTSTV NIGERIA
News
Previous articleFollowing Weeks of Insecurity, Killings In Southern Kaduna and Attacks By Boko Haram Terrorists In The North East Region, President Muhammadu Buhari Again Summons The Service Chiefs
Next articleWeak Purchasing Power, Foreign Exchange Hitches and Rising Competition Behind Shoprite’s Proposed Exit From Nigeria
© Newspaper WordPress Theme by TagDiv