Appointed in April 2017, Gbajabiamila is now facing allegations of circumventing procurement laws and other forms of abuses by members of the governing board of NLRC who issued a 12-paged query dated December 9, 2019 to the DG.

These are certainly not the best of times for the Director General of the National Lottery Regulatory Commission(NLRC), Lanre Gbajabiamila as the noose tightens around his neck over alleged financial recklessness and misappropriation of public funds running into several billions of naira. He is expected to be a guest of the Economic and Financial Crimes Commission (EFCC) and the Independent Corrupt Practices Commission (ICPC) after the governing board of the Commission wrote to the anti-graft agencies calling for a probe of the Commission’s finances with a view to determining if the Director General (DG) took cognizance of extant regulations and laws of the federation in the dispensing of the agency’s funds.

A deluge of petitions 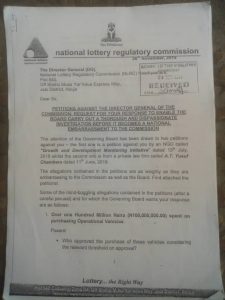 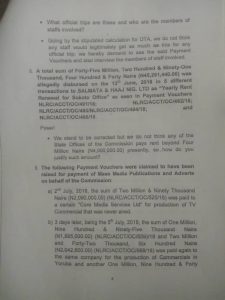 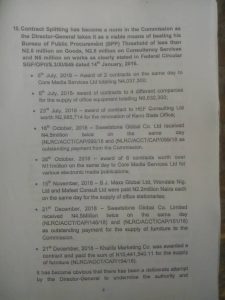 Appointed in April 2017, Gbajabiamila is now facing allegations of circumventing procurement laws and other forms of abuses by members of the governing board of NLRC who issued a 12-paged query dated December 9, 2019 to the DG.

Beyond the query, there are two other petitions against the DG currently in the possession of the anti-graft agencies. One of the petitions dated July 13, 2018 was from a nongovernmental origination, Growth and Development Monitoring Initiative, and the second came from the private law firm of A. T. Yusuf Chambers. It was dated June 11, 2019.

In the petition sent to the anti-graft agencies by the governing board, detailed accounts of how Gbajabiamila spends the agency’s Internally Generated Revenue (IGR) through issuance of various payment vouchers without the knowledge and approval of the board were made. The board members accused Gbajabiamila of violating the provisions of the Public Procurement Act, and Bureau for Public Enterprise guidelines in his dealings as the head of the lottery regulations body.

According to the documents published in the media, Gbajabiamila 2017 authorised the spending of over N626.7m from the commission’s revenue without recourse to laid down rules. The amount spent without authorization from the Commission’s IGR for 2018 and 2019 were N956 million and N827 million respectively.

Heavy spending on call cards and other dubious transactions

Gbajabiamila  also granted a dubious waiver of N39m to Mobicards International Limited by without bringing the matter up with the Governing Board for deliberation and approvals. On July 12, 2018, a payment voucher with number NLRC/ACCT/OC/595/18 showed how he paid N900,000 as cost of call cards to himself.  Then on July 2, 2018, over N2m was paid to one “Core Media Services Ltd” for production of television commercials that was never aired in any local or foreign TV channel. On October 26, 2018, over N11m was spent on non-existent media adverts on behalf of the commission on TV stations. Another case was the commission’s award of contract worth N60m to Quantech Technology Service and another N50.7m to Double T. Consult Ltd in gross violations of the Procurement Act.

How to beat the system

Under Gbajabiamila, contract splitting is a standard practice. This, many insiders believe, provides the DG a viable means of beating his Bureau of Public Procurement threshold of less than N2.5m for consultancy services and N5m on works as stipulated in Federal Circular issued on January 14, 2016. In one of such instance, on July 5, 2018, two contracts valued at N4,037,300 were awarded to Core Media Services on the same day in a clear case of contract splitting.

Gbajabiamila has allegedly been raising vouchers and paid hefty amounts to his staff and aides as Duty Tour Allowances, travelling allowances and “oversight function” to state offices. In one classic example of this, the Secretary to DG, a GL 8 officer on a probationary appointment, was paid N632,000 on November 15, 2018 via payment voucher NLRC/ACCT/OC/900/18 as DTA to Zonal Offices. She had earlier received N489,000 on July 10, 2018 as oversight function to state offices through voucher number NLRC/ACCT/OC/579/18.

The Board of the Commission has raised questions over these payments wondering where the said officer carried out the oversight and the justification for raising payment vouchers in her name even when she was still under probation.

Another beneficiary of the dubious DTA regime under Gbajabiamila is his PA, a junior staff who on July 2, 2018 received N255, 700 as DTA to Lagos just as he was also paid another N1.5m in two transactions as oversight function to states. On December 4, 2018, the PA again was paid N672,500 as DTA to visit Lagos and Owerri offices for oversight.

A few days to the end of 2018, specifically between December 27 and 28, 2018, the commission made transfers worth N14m to the personal accounts of staff as “travelling allowances.” There are speculations that the staff were required to return in cash, a part of what was paid into their accounts.

The commission has through various voucher payments claimed to have paid millions of naira as cost of hosting Board meetings, DTA, travelling allowances and accommodation for the Board chairman and his member, a claim which the Board faulted in the document.

Gbajabiamila may not be alone

Some heads of unit in the Accounts Department of the commission may also be invited for questioning by the anti graft agencies. It was discovered that November 26, 2018 for instance, the Head of CPO Unit, checking unit and other charges discovered seven different transactions totalling N15m as DTA claims paid directly to their various accounts. In the same vein, funds amounting to over N14.6m have allegedly been disbursed to the Senate Committee Chairman and some members of House Committee on Sports under the guise of “Senate House Committee Settlement” for DTA and oversight functions.

Mum is the word

Since assumption of office in 2017, Gbajabiamila has never presented a single payment voucher to the Board for approval as contract splitting is said to have become his “natural habitat”. Also, no committee in the commission had been allowed by Gbajabiamila to function since he assumed office.

It is unclear if Gbajabiamila replied to the query issued by the board. There has also been no attempt by him or any of his aides to address the media on these allegations.