Gruesome Killings, Why Is The Nigerian Police Against Itself and Citizens?

By the very nature of the 1999 constitution, the Nigerian Police Force is assigned as the National Police of Nigeria, with exclusive power in the 36 states and the FCT. The primary roles of a police officer entail safeguarding lives and property, serving his or her community, keeping peace, justice and equality among others.

But were all these principles adhered to in the case of a 16-year-old Tina Ezekwe? little did she know that she would be a victim of circumstance on the 26th of May 2020. According to reports, one of the policemen on patrol at that time tried to arrest a bus driver for violating the nationwide curfew.  In the process, young Tina was hit by a bullet. A gunshot wound she did not survive.

In a video shared by Oworo TV,  Tina was found lying on the ground after being shot as many were seen shouting her name. she was then carried from the floor by an unidentified man. 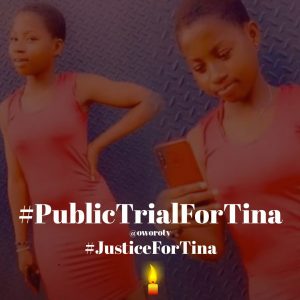 According to eyewitness account gathered by BBC, the policeman who shot Tina, was drunk on duty, while demanding 200 Naira bribe from the bus driver. When the driver failed to comply, the driver shot.

Another eyewitness by name Ruka suggested the Policeman who pulled the trigger on Tina was drunk as he was threatening to shoot the young girl again and shoot himself. Tina was said to be outside when the incident happened. She was supposed to sit for her WAEC exams.

Following calls from Nigerians that justice must be served, the police, on Friday 29th May ordered an investigation into the killing of Tina. The police revealed that the two officers, ASP Theophilus Otobo and Inspector Oguntoba Olamigoke,  suspected to have a hand in the incident, had been arrested.

A statement issued by the spokesperson of the Lagos State Police Command, DSP Bala Elkana reads:

“The incident happened on 26th May 2020 at about 2245 hours. The said Police officers fired shots from their pin down point along Berger by third Mainland Bridge, in a circumstance yet to be determined, one Musa Yakubu Male 35 years was injured at the point and a stray bullet hit Tina at Berger Yanaworu Bus stop. The bullet pierced through the left upper side of her lap. She was rushed to hospital by a team of Policemen led by the Divisional Police Officer. The battle to safe of her life lasted for two days; she died on 28th May 2020 at 2129 hours while on admission. The second person is in stable condition. The police is in contact with the families of the victims from the day of the incident. The Command deeply sympathize with the family and friends of the deceased person”

Just when Nigerian were trying to come to term with the death of Tina, Vera Uwaila, a 100 level student of the University of Benin died from injuries sustained after she was gang-raped and injured with a fire extinguisher.

The heinous act was committed at the Ikpoba Hill branch of the Redeemed Christian Church of God, where she had gone to read. The unconscious Uwa was rushed to the University of Benin Teaching Hospital but lost the battle for her life. Edo State Governor Godwin Obaseki, on hearing the incident ordered an immediate investigation into the circumstance surrounding Uwa’s death and that the perpetrators be brought to book.

These happenings outraged Nigerians, with many expressing their displeasure on various social media platforms. Some of the social media comment reads:

“Now this?! This is all too much! Police brutality needs to STOP!#JusticeForTina

“They either abuse their power or have the power to abuse.

“In or out of uniform, we live in constant fear of men. Tina Ezekwe, Vera Omozua.

“Rest In Peace my darlings. We will get justice

“We all need to demand #JusticeForTina All she did was stand at a popular junction and she was shot by a Nigerian Policeman. It could be any one of us, and we will not stop until we have a reform of the Nigerian Police Force. I don’t want to mind my business and still be shot 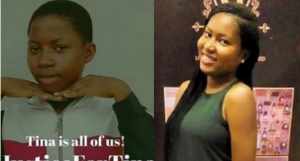 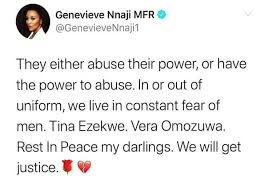 “16 yr old Tina lost her life to ruthless Policemen on Monday, tet again we are confronted with the harsh reality of Police brutality in Nigeria. How many more need to lose their lived before action is taken? Tina’s death is Unwarranted and needs to be answered for#JusticeForTina

“Two innocent girls have just been murdered in Nigeria, #TinaEzekwe, 16 year old who was killed by two police officers and #Uwa, 22 an undergraduate raped and killed in a church. In 2015 ,#UNICEF reported that one of Four girls experience sexual #Violence before the age of 18.

“This is a very scary time to be black and a woman in the world. If it’s not racism, it’s rape. If it’s not rape, it’s death by the hands of the very same people meant to protect us. Today it’s #Uwa, tomorrow it might be someone close to us. Something should be done!”

The Inspector-General of police also reacted to the murder of Uwa in a statement issued by the Force Public Relations Officer DCP Frank Mba.

“As part of deliberate and concerted efforts by the Nigeria Police High Command to unravel the circumstances surrounding the brutal attack and unfortunate death of Miss Vera Uwaila Omosuwa in Benin, Edo State on 28th and 30th May, 2020 respectively, the Inspector General of Police has deployed additional investigations aids and forensic support to Edo State Police Command to complement and expedite actions in the ongoing investigations into the unfortunate incident.

The IGP, while condemning the attack, commiserates with the family, friends and colleagues of the deceased. He called for calm and assures that the Force will surely bring the perpetrators of the callous act to book in the shortest possible time”

On the 17th of April 2020, Ifeanyi Arunsi was said to have been gruesomely murdered at Ebem Ohafia in Abia State South-East Nigeria. The then Abia Commissioner of Police Mister Ene Okon later said that the policeman who allegedly killed Arunsi acted under the influence of alcohol when he committed the act and that the policeman in the company of his colleagues was not on any official assignment.

The victim was in the company of his colleague discharging goods from a truck when the police officers, who were neither on duty nor on COVID-19 preventive assignment, ran their car into the truck off-loading goods. An argument ensued, and one of the officers brought out his police rifle and shot sporadically under the influence of alcohol. 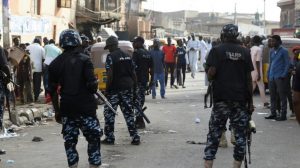 On Tuesday, the 14th of April 2020, the Police in Anambra State killed two persons, while enforcing the lockdown order in the state. The incident happened at the New Tyre Market Area of Nkpor in the Idemili North Local Government Area of the state. It was alleged that the two young men were killed outside their residence in an attempt by the police officer to enforce the stay at home order.

They had insisted that since they were in front of their residences, the Police could not force them into their rooms. That created tension between the Police and the people present and led to the Police shooting at the two young men.

Sergeant Bitrus Osaiah attached to the Rivers State Task Force on COVID19 allegedly killed a policewoman Lavender Elekwachi who until her death was attached to Eneka Division in Obio/Akpora Area of Rivers State and was posted to Eneka roundabout on traffic duties. The incident reportedly happened on the 23rd of April 2020 in a market at Eneka in Port Harcourt.  According to reports, the policewoman attempted to stop the Officer and other members of the TaskForce from destroying the wares of market women when the officer pointed a gun and killed the nursing mother of an 18-month-old baby.

Inspector Monday Gabriel was arrested for the killing of Sergeant Felix Okago in Ikoyi Lagos. The police Inspector attached to Police Mobile Force Squadron 21 Abuja on special duty in Ikoyi Lagos shot sporadically. Sergeant Okago who happened to be on special duty with Inspector Gabriel Monday, died from gunshot injuries. The Lagos Police Spokesperson while confirming the incident said the rifle and vehicle in possession of the Inspector had been recovered and he has been taken to the Police Hospital for medical examination as he presented signs of mental depression.

Things are falling apart, citizens living in the fear of the unknown. Police have apparently turned to killers of the very citizens they are bounded by the law to safeguard.