The former General Officer Commanding  8 Division, Major General Hakeem Oladapo Otiki has been found guilty on all 5 count charges by the General Court martial headed by Lieutenant General Lamidi Adeosun.  Hakeem Otiki was found wanting for disobeying service order, theft of public property among others. He was reduced to the rank of Brigadier General and dismissed from service. 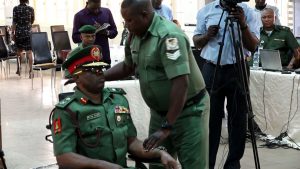 The sentences for the counts are

Count 2 Dismissal with disgrace and dishonor

Count 1 Dismissal with disgrace and dishonor

The sentence is however subject to confirmation by the Army council

About 135 Million Naira was recovered from Hakeem Otiki, who in the course of trial pleaded not guilty to all the count charges

The court also made the following order

Counsel to Hakeem Otiki expressed his reservations, saying his client reported the theft and that the circumstances that resulted to the monies being carted away will be put down as mitigating factors before the Army council.  So the council can have a re-think about the judgment.

“The witnesses for the prosecution confirmed that there were ongoing projects, some were completed. so if the projects were completed, if some were ongoing as at the time they came to testify, why would you now dismiss a person based on that with disgrace and dishonor and you recovered even the 100 million. Even the 100 million was returned before the investigation by the SIB which started on the 12th. He was not the one that robbed it was the soldiers’ Counsel to Otiki said

In July 2019, monies running into hundreds of millions of Naira being transported from Sokoto to Jaji Kaduna State was said to have been carted away by soldiers on escort duty.

Their names were giving as 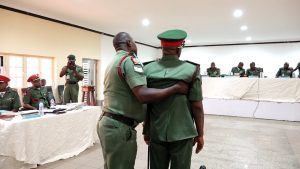 On the 17th of September 2019,  The Nigeria Army inaugurated a court martial in Abuja for the trial of   Hakeem Otiki over the alleged missing sum initially reported as 400 million Naira.

The former Army GOC through his counsel rejected the Chief of policy and plans Lieutenant General Adeosun as head of the General Court Martial owing to the frosty relationship between Adeosun and Otiki.

News
Previous articleOsinbajo’s Committee to FG: Suspend NYSC for 2 Years
Next articleMamman, Greed and the Brewing Crisis in the Power Sector
© Newspaper WordPress Theme by TagDiv