The Edo state governor, Godwin Obaseki has joined the Peoples Democratic Party (PDP) days after resigning from the ruling All Progressives Congress, APC.

The governor has been locked in a fierce supremacy battle with his predecessor and godfather, Adams Oshiomhole who many believe is rooting for Osagie Ize-Iyamu who recently decamped to the APC. 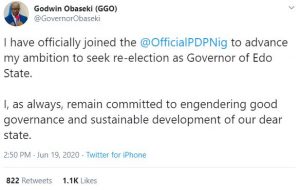 The governor revealed his new political family on his Twitter handle this afternoon. His announcement was also confirmed by the PDP on its official Twitter handle.

The Edo state governorship election is scheduled for Saturday, September 19, 2020. Obaseki will be battling to retain his seat while Ize-Iyamu, his likely opponent would be working to do better than he did when he went head to head with the incumbent in the 2016 race.