Aso House Of Commotion: Aisha Buhari And The Many Contenders

Even after the demise of Mallam Abba Kyari, who is said to be the De-Facto President, and the oracle that needed to be consulted before actions were taken, there are people at the seat of power battling for supremacy.

Who is really in charge at Aso Rock?

The face off this time was between President Buhari’s personal assistant Sabiu Tude Yusuf and first lady Aisha Buhari. It was reported that there was a commotion that resulted into shots being fired at the Nation’s seat of power.

The President’s PA got back from Lagos and was asked by President Buhari’s Aide De Camp and the Chief Personal Security to quarantine for the required number of days so as to prevent those at the Presidential villa from contracting the deadly disease having had contact with the late Group Managing director of NNPC who died from COVID-19.

Yusuf ignored the directive and this devolved into a confrontation between him, the first lady and her security orderlies. Yusuf who was said to have forced his way into the villa was pushed out by the security detail of Mrs. Buhari. This resulted in a shooting at the Presidential villa and led to the arrest of Aisha’s ADC, escort commander and other security aide of the first lady by Yusuf and the Chief Security Officer to President Buhari.

3According to Sahara reporters, Yusuf is considered as Abba Kyari’s successor and he is slowly gaining momentum to become the de facto President.

The previously detained Aide De Camp to the first lady, Usman Shugaba has been released but reassigned to the Police Force Headquarters in Abuja after the First Lady’s plea to the IG on Twitter asking him to release her aides.

The First Lady obviously displeased by the development, further urged that the Quarantine Act assented to by President Buhari be enforced to bring defaulters to book.

“COVID-19 is real and still very much around in our nation is not in doubt. Consequently, I call on all relevant government agencies to enforce the Quarantine Act signed by Mister President and ensure no one is found violating this law and the NCDC guidelines especially on interstate travel without the necessary exemptions for movement of essentials. Anyone who does that should at the very least be made to undergo a 14 day mandatory isolation no matter who the person is. No one should be above the law and the police command will do well to remember that.”

It will be recalled that the First Lady also stood up against those working at the State House who disregarded the recommended safety measures against the spread of the coronavirus during the funeral of the late Chief of Staff to the President, Abba Kyari.

The special assistant to the President on Media and publicity while reacting to the shooting at the statehouse in a tweet described the incident as a “Minor Occurrence” which happened outside the main residence of the President and led to the arrest of some staff by the police.

“The Presidency wishes to acknowledge concerns expressed by several members of the public regarding the recent incident among the occupants of the State House which escalation led to the arrest of some staff by the police. 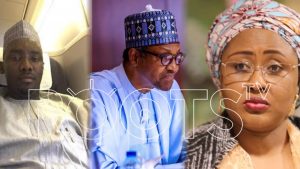 This is to assure everyone that the President and Commander-in-Chief of the Armed Forces, @MBuhari, is not, and was not at anytime in any form of danger arising, either from deadly infections or the reported incident by security personnel which is currently under investigation”. Extract from Garba Shehu’s tweet.

There appears to be more to come in the Aso rock scuffle, perhaps new cabals are springing up to fill the power vacuum left by the demise of the deceased Abba Kyari, Nigeria’s Late De-Facto President. Will the Elected President Buhari finally stand up to these notorious ‘forces’ seeking to control his presidency? I guess we’ll have to wait to find out.