The Federal High court sitting in Abuja has ordered the Speaker, House of Representatives Honorable Femi Gbajabiamila to appear in Court over the ongoing moves to invite the Opposition Coalition Spokesperson, Ikenga Imo Ugochinyere to appear before the Henry Nwawuba led Adhoc Committee probing the media statements and opposition of the CUPP against Speaker Gbajabiamila’s ‘Compulsory Vaccination Bill’.

The presiding Judge, Justice Taiwo Taiwo in his ruling on a suit brought by Ikenga Imo Ugochinyere Spokesperson of the CUPP reminded the Defendants (Femi Gbajabiamila, House of Representatives, Clerk of the National Assembly and the Inspector General of Police) of the settled position of the law that once a matter is in court parties must not do any act to foist upon the court a situation of fait accompli 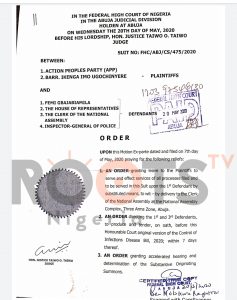 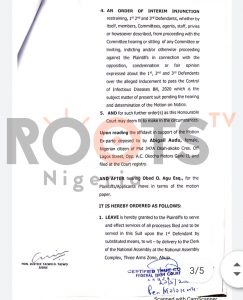 It would be recalled that allegations were made that Gbajabiamila and some House members collected a bribe to the tune of $10 million from a foreign sponsor suspected to be Bill Gate to fast-track the speedy passage of the control of Infectious Diseases Bill.

The Speaker had on Tuesday, 19th of May 2020 set up a 12-man committee to look into allegations.

The CUPP) had in a statement on Monday, alleged that the leadership of the House received $10 million bribes from Bill Gates to sponsor the controversial Bill.

The spokesperson of the House of Representatives, Benjamin Kalu, in a swift reaction said the House could not fall for cheap blackmail.

However, on the 20th of May 2020, the  CUPP at a news briefing declared that with the ongoing purported investigation of Ikenga Imo Ugochinyere by a Committee of the House set up by the Speaker Femi Gbajabiamila will not see the test of time as Ugochinyere would not be appearing before the Committee.

“The events at the farce hearing on Monday, 18th May 2020 was a clear attempt to intimidate the opposition and the media and ensure they only publish pro-public news. The military attempted this and failed. Speaker Gbajabiamila who obviously would have boasted to his masters that he would succeed to take out the opposition from the media space will fail in this agenda and fall like a pack of cards.

“We have reviewed the statements by our Spokesperson including all his press statements and press conferences and we declare that they were all in line with international best practices expected by the opposition and we pass a vote of confidence on our National spokesperson Ikenga Imo Ugochinyere. He has held our flag flying high and he will keep doing that no matter the amount of coordinated attacks from the likes of Speaker Femi Gbajabiamila. “

Amongst other demands, Speaker Gbajabiamila was asked to step aside along his Deputy and so as to allow a neutral person to preside and set up a Committee.

The opposition expressed what it termed as a disappointment that an opposition lawmaker in the person of Hon. Henry Nwawuba is the one driving the vehicle to prosecute it.

“Even after he was duly informed that the matter he was investigating was subject of a judicial process, he continued, adjourned and insisted on using all his powers to secure the attendance of our Spokesperson to his illegal sitting. We never knew Hon. Henry Nwawuba is now the Nigerian Supreme Court that has the final adjudicatory powers in the country. We hope the moles in PDP will be identified through this process and appropriate punishment meted out to them” CUPP chairman said.