After a series of confrontations between Nigeria’s communication and digital economy minister Isa Pantami and chairman of Nigerians in Diaspora Commission (NiDCOM) Abike Dabiri-Erewa, the fight over an office space by the two appointees of President Muhammadu Buhari took another turn late Sunday.

The disagreement between both government officials became public after NiDCOM published a video in February on its Twitter and accused Pantami of masterminding the eviction of its staff from office space at the Nigerian Communication Commission (NCC) building in Abuja.

NCC is under the control of the ministry Pantami heads.

Dabiri-Erewa doubled down on that claim in an interview with the Nigerian government-owned NTA. The interview was aired on Friday and was later published on NTA’s YouTube channel. 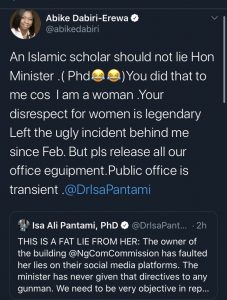 But Pantami said on Twitter on Sunday that he was not responsible for the eviction, claiming that the media reports did not tell “a true story.”He has since deleted the tweet.

Dabiri-Erewa, however, insisted that Pantami was to be blamed for the problem, stopping just short of calling the minister a liar.

She accused the minister of disrespecting her because she is a woman.

“An Islamic scholar should not lie Hon Minister,” Dabiri-Erewa tweeted, “You did that to me cos I am a woman. Your disrespect for women is legendary.”

“Left the ugly incident behind me since Feb. But pls release all our office equipment. Public office is transient.” 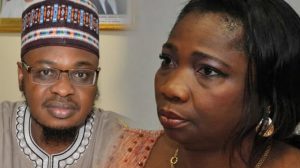 She asked the minister to “tell us where he locked up our equipment and release them. After the lockdown, we will settle for some options we already have.”

NCC in a statement by its spokesman Henry Nkemadu dismissed the claims on Sunday and said the report of forceful eviction was not true.

Pantami in a tweet thereafter accused NiDCOM chairman of telling a “Big fat lie” and did not provide any explanation of events that led to the alleged eviction. He also did not speak on the allegation that NiDCOM’s working equipment was locked up in NCC building

The had since then deleted the tweet where he spoke on the issue, accusing NiDCOM chairman of telling lies.