08.04.2020
Facebook
Twitter
WhatsApp
The Nigerian Military has confirmed that its combined troops of 403 Special Forces Brigade Baga and the Air Task Force Operation of Operation LAFIYA DOLE have inflicted heavy casualties on the dreaded Boko Haram and ISWAP members after a fierce encounter at Kure village in Borno State.
The encounter, as contained in a statement issued by the Acting Director, Defence Media Operations, Brigadier-General Bernard Onyeoku occurred on Sunday, 6th of April, 2020.
According to Onyeoku, the terrorists were decisively dealt with during the encounter as they suffered heavy casualties with un-confirmed number escaping with gunshot wounds.
“Some of the items recovered include; One Gun Truck, One Anti Aircraft Gun, One Motorcycle. Others are One Light Machine Gun, One AK 47 Rifle and a magazine, Two Hundred and Twenty Seven (227) rounds of 12.7 mm ammunition and ten (10) rounds of 7.62 mm Special ammunition.”
The military said there was no casualty or equipment losses by the joint military forces.
This new development is coming three days after the Armed Forces of Nigeria, through the Air Task Force of Operation LAFIYA DOLE and Artillery Batteries of Sector 3 of the Multi-National Joint Task Force (MNJTF), disclosed the destruction of an Islamic State of West Africa Province (ISWAP) camp at Tumbun Fulani on the fringes of Lake Chad in Northern Borno State.
Onyeoku said the feat was achieved in combined air and artillery bombardments conducted on 3rd April 2020 as part of the coordinated joint offensive by the MNJTF to dislodge and completely rid the Islands (Tumbuns) of Lake Chad of terrorists’ presence and activities.
“The operation was executed on the heels of credible intelligence reports indicating that the ISWAP elements, with their structures concealed under the dense vegetation of the area, used the settlement as a base from where they plan and launch attacks. Accordingly, the joint interdiction mission was launched with a Nigerian Air Force (NAF) Intelligence, Surveillance and Reconnaissance (ISR) aircraft coordinating the barrage of artillery and air fire towards designated targets in the settlement, destroying them and neutralizing some of the ISWAP fighters in the process.“
The Military reiterated that the Air Task Force has continued to provide airlift support to troops of participating Multi-National Joint Task Force national contingents, along with their logistics.
“Nigerian Air Force ISR platforms and helicopters are also providing aerial command posts for enhanced coordination of close air support missions as well as fire control support for independent ground artillery bombardment of terrorists’ positions“. 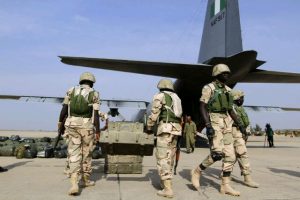 The Armed Forces of Nigeria maintained that it will sustain the offensive against the enemies of Nigeria just as it enjoined the public to continue to cooperate and support the security forces with credible information that could aid/hasten the completion of the ongoing clearance operations.
Onyeoku also confirmed that the Nigerian Navy Ship DELTA patrol teams conducted anti-Crude Oil Theft (COT)/anti-illegal bunkering operations in its Area of Operation during the week.
He said: “The patrol team was said to have located an illegal refining site around Opumami in Warri South LGA of Delta State. The site had Thirty  (30) ovens, forty (40) receivers and sixteen 16 dugout pits cumulatively laden with about 120,000 liters of product suspected to be stolen crude oil and 40,000 liters of suspected illegally refined AGO. Same day, the team discovered another illegal refining site at around Opumami general area. The site had 2 ovens, one receiver, 8 x 250 liters metal drums and one dugout pit cumulatively laden with about 30,000 liters of suspected stolen crude oil and 25,000 liters of product suspected to be illegally refined AGO.“ 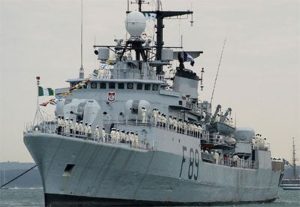 He said no arrest was made during the operations “as the criminals were said to have fled on sighting Nigerian Navy Ship DELTA patrol team.”
In the same vein,  the Nigerian Navy Ship DORINA while on routine patrol arrested a fishing trawler, HAJIYA BINTA for allegedly operating in Nigerian waters without its Automatic Identification System (AIS).
“The arrest was effected at about five 5 nautical miles off the ESCRAVOS breakwaters. Upon interrogation, the Captain of the vessel,  affirmed that the AIS of the vessel was not operational as at the time of her arrest due to a fault it developed while at sea. HAJIYA BINTA was handed over to NIMASA officials on 31 Mar 20 in line with due process.”
Source:ROOTSTVNIGERIA
NewsSecurity
Previous articleVIDEO: FCT Residents Defy Lockdown Order
Next articleTreasury House Fire: PDP Suspects Foul Play, Demands Investigation
© Newspaper WordPress Theme by TagDiv