Soldiers in a viral video using uncouth and uncivilized language and threatening to molest women in Warri, Delta State over the purported killing of a soldier by residents have been arrested. The Nigerian Army has confirmed.

On the 2nd of April 2020, a soldier of the Nigerian Army was accused of killing a man, identified as Joseph Pessu, in Warri Delta state. Pessu was said to have gone to buy food for his pregnant wife and reportedly flaunted the enforcement Lock-down which lead to his death.

This resulted in a protest by youths of the area who took to the streets to register their displeasure. The soldier who shot the young man to death was said to have reported himself to the A Division police station in Warri where he was detained.

The Nigerian Military, through the coordinator Defence Media operations, had initially explained that the viral videos showing men in Military uniforms brutalizing citizens were not authentic, saying that investigations were ongoing on the killing of the Warri resident.

“The Defence Headquarters wishes to once again clarify that the viral videos trending online showing men in uniform are not genuine. The general public should please disregard these video and consider it as actions of mischief makers who intend to tarnish the good image, integrity and sterling achievements of the Armed Force of Nigeria’

However, the Nigerian Army revealed in a tweet that the soldiers in the video have been arrested at 9 Brigade Ikeja Military Cantonment.

The Nigerian Army wishes to reiterate that it would not tolerate any form of irresponsibility and indiscipline on the part of any of its personnel. 3/3

Meanwhile, the Inspector General of Police, through a statement issued by the Force Public Relations Officer DCP Frank Mba has cautioned officers and men of the Nigeria Police Force currently deployed for the enforcement of the lockdown and social restriction orders to ensure that the rights of Nigerians are not infringed under any pretext.

“Persons on essential duties, duly exempted from the restriction orders, should be accorded due courtesies and unfettered access to and fro their places of duty.

The IGP noted that “the global community is now in extra-ordinary times, with the lockdown taking its tolls on every component of our national life. Therefore, all police officers deployed for the enforcement of these restriction orders must be professional, humane and tactful and must show utmost respect to the citizenry. To this end, the IGP has directed Command Commissioners of Police to immediately commence conduct monitoring of Police Officers deployed on enforcement duties in their areas of responsibilities”

The IGP equally charged Zonal Assistant Inspectors General of Police (AIGs) across the nation to ensure adequate supervision of personnel under their watch, as well as due compliance with the Standard Operating Procedure guiding this special task.

“The AIGs and CPs are also to ensure robust anti-crime patrols and surveillance around vulnerable targets such as medical facilities, shops and markets, residential areas, financial institutions and Automated Teller Machines (ATM) points, amongst others so that criminals do not take undue advantage of the current COVID-19 challenge to perpetrate crimes against the citizenry”

The coalition of United Political Parties CUPP has registered its displeasure over the threat issued in the viral video by two Nigerian Soldiers.

The Spokesperson of the group, Ikenga Ugochinyere in a statement said “as disturbing as the video is, and in recognition that the alleged threats were made in expression of anger against the alleged killing of a soldier by a mob in Warri, the CUPP calls on the Army High Command, the Police Headquarters and indeed the Presidency to immediately swing into action and ensure the threatened reprisals are averted.

“This will be a dent on the integrity of the Nigerian Army if these threats are allowed to be executed. The Army should take the moral high ground in this instance. It is not a show of weakness or acceptance that anybody could just kill a soldier anyhow but there is every need to allow for a thorough investigation to unravel the facts about the deaths that occurred in Warri, of the citizen and the soldier. Afterwards, every person who had a hand in the killings will be directly held responsible for their crimes”

In a similar stance, the Peoples Democratic Party PDP blamed the Federal Government and the All Progressives Congress over the Warri Killing saying that it stands with Nigerians against security brutality.

The Publicity Secretary of the Party, Kola Ologbondiyan in a said the paid “vehemently condemns the extra-judicial execution of an innocent Nigerian by the security operatives in Warri, Delta state and the reported brutalization of Nigerians in many parts of the country by security forces under the guise of enforcing the lockdown order to check the spread of COVID-19 pandemic in our country.

“The PDP insists that such acts of violence against our citizens cannot be condoned or justified under any guise whatsoever. The party calls on Nigerians to hold the Buhari Presidency and the APC responsible for the Warri killing as well as the reported brutalization of Nigerians, noting that such ugly situations would have been averted if the APC controlled Federal Government had heeded wise counsel by the PDP and other well-meaning Nigerians and made adequate provisions for social palliatives that cushioned the economic challenges of the lock-down.

“The APC government had failed to shelve its political interests and heed good suggestions to implement calls to cut taxes, reduce fuel price and use the states and local governments to channel essential commodities to poor Nigerians whose means of survival comes only from their daily struggle on the streets and markets.

“The APC government has also failed to constitute an Eminent Nigerian Group to administer the palliatives and eliminate all political and bureaucratic bottlenecks that are now encumbering easy flow of social panaceas, leading to poor Nigerians coming out to seek for survival on the streets.

The PDP further blamed the APC and its administration for emboldening acts of violence and extra-judicial killings by security operatives following “their failure to bring perpetrators of such acts to book as even detailed in reports by various reputable international organizations including Amnesty International (AI), Transparency International (TI), European Union (EU), United States Department of State”

The Minister of State for Labour and Employment Festus Keyamo, who hails from Delta State, also condemned in strong terms the alleged killing by soldiers putting into account the report of misconduct and highhandedness by security personnel owing to the lock-down enforcement.

Keyamo revealed plans to forward a petition to relevant authorities to investigate the incident, so that those found culpable will face the full wrath of the law. 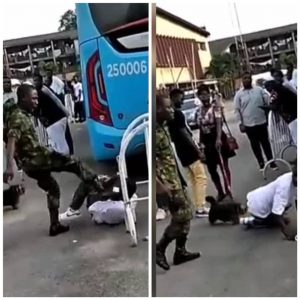 “I unreservedly condemn this barbaric act by men of the armed forces who should exercise restraint when dealing with the civilian populace. In the interim, let us not take the laws into our hands, please. I will also use this medium to sincerely appeal to my brothers and sisters in Delta State to be law-abiding and obey the orders of restrictions imposed by both the Delta State Government and the Federal Government.”

The news that Major General OG Adeniyi has been redeployed from Headquarters Theater Command Operation Lafiya Dole Maiduguri to the Nigerian Army Resource Center as Senior Research Fellow was greeted with mixed reactions. Some said it was a tit for tat approach and the video of him giving situation report from the battlefield was said to have infuriated the military’s hierarchy, which thus informed the decision to relieve him of his position.

But the Coordinator of the Defence Media operations, Major General John Enenche gave a contrary view.

Speaking at a press briefing, Enenche said Adeniyi’s redeployment was an administrative procedure. “It is routine and posting is a regular process at our Military secretary’s department of the Armed Forces. I want to stress that, it is nothing the way you presented it” Enenche said