There was an uproar at the floor of the Senate on Thursday following the approval of President Muhammadu Buhari’s request to borrow $22.7 billion naira to fund critical infrastructure projects under the 2016 – 2018 External Borrowing Plan.

Buhari, in 2019 had sent the loan request to the senate but was rejected by the Upper Legislative Chamber under the leadership of Bukola Saraki.

Before its approval, Senate Minority Leader, Enyinnaya Abaribe cautioned against the approval of the loan.

“We are going to pass a loan of $22.7billion for which we are being denied the privilege to express our reservations. You are putting us in a very impossible position. 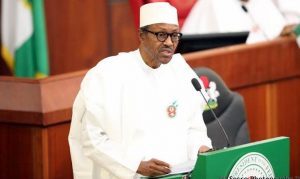 “There are some aspect of this loan that we object to. I want to ask on behalf of our colleagues here that we take these items one by one and vote on them.” Abaribe said.

While responding, Senate President, Ahmad Lawan disagreed with Abaribe saying the Senate will only vote on the two recommendations in the report.

The heated debate over the request forced the Senate to enter into an executive session.

After the close door session that lasted for about 30 minutes, the Senate finally approved the two recommendations in the report.

The 8th Senate, under the leadership of Senator Bukola Saraki had in 2016 rejected Buhari’s request to borrow the sum of $29.960bn.

Explaining the reason for the rejection, Former Kaduna Central Senator, Shehu Sani disclosed that the request was turned down to safe Nigeria from sinking into the “dark gully of perpetual debt trap.” 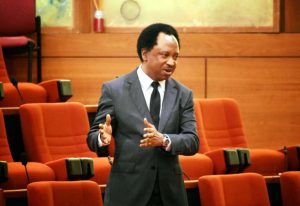 He said, “If we had approved that loan request, our external debt could have catapulted to over $52bn and that is not sustainable.

“With the current escalation of borrowing, we will be walking into debt slavery and move from landlords to tenants in our own country.

“They will always tell you that even America is borrowing and I don’t know how rational it is to keep on borrowing because another country is borrowing.

“If we keep listening to bankers and contractors, we will keep borrowing and burying ourselves and leave behind for our children a legacy of debt burden.

“Loans are not charities. Most of those encouraging more borrowing are parasitic consultants, commission agents, rent-seeking fronts and contractors.” He said.

The Burden of Debts

Before May 2015 when President Muhammadu Buhari’s led administration came on board, Nigeria had a total debt of about N12 trillion but at the end of June 2015, the country’s debt rose to N12.1 trillion.

At the end June 2018, Nigeria’s debt has almost doubled since Buhari took over with the debt figure reaching an astronomical high to N22.4 trillion. According to the record provided by the Debt Management Office, Nigeria’s Debt Profile as at September 2019 stood at N26.215 Trillion.

President Muhammadu Buhari recent request for new borrowings in the Appropriation Acts has gotten many Nigerians asking questions on the need for it when the country is said to be using 50 percent of its revenue to service debts.

But the Federal Government, through the Debt Management Office explained that the borrowings by the Buhari’s led administration are driven by strategy.

“All of what we have done in 2017, 2018 and 2019 have been driven by the strategy so if you look at the budget first of all, you see that there’s new domestic borrowing, new external borrowing for each of those years, it is because these strategies says domestic borrowing is more expensive, lets mix it with external but in addition to that you want external because it also helps reserves and you can get more longer tenure. It also says that your domestic debt portfolio has a lot of short term instruments. Treasury bills has also been trending lately so lets extend that to long term. That is why you saw us active in Euro bonds market in 2017 and 2018 and then for treasury bills, we repaid about a trillion naira of treasury bills using the proceeds of the 3 billion euro bonds. So there’s a strategy around it. It is not what DMO feels or what it want to do” Patience Oniha, the Director-General, Debt Management Office had explained.

Source:ROOTSTVNIGERIA
GovernanceNews
Previous articleAre We Having the Funeral of APC So Soon?
Next articleFG Blames the Completion of Lagos-Ibadan Rail Project on Coronavirus
© Newspaper WordPress Theme by TagDiv