Considering the number of people he confessed to have kidnapped and killed, Hamisu Wadume and those accused of having a hand in the killing of police officers and civilians in Ibi Taraba state appeared today (Monday, 16th of March, 2020) at the Federal High Court Abuja.

This is coming over a month after the Nigerian Police slammed a sixteen count charge on Hamisu Wadume, Captain Balarabe, and eighteen others, precisely on the 6th of February 2020. The Police Force through the Inspector-General of Police charged Wadume and his suspected cohorts on counts bothering on terrorism, murder, kidnapping and illegal arms running.

Owing to controversies that led to the arrest, escape and re-arrest of the suspected notorious kidnapper in August 2019, it took about 5 months before the charges were filed in the court of law after a dead silence from the warring security agencies, the Army and the Police.

The case has now been assigned to Justice to Binta Nyako.

The face-off between the police and the Army started after the arrest of the kidnap kingpin Wadume by the IGP’s Intelligence Response Team (IRT). The policemen were attacked by soldiers of 93 Battalion, shown in a viral video that horrified the nation. Captain Tijani Balarabe allegedly ordered the shooting of the officers who released Wadume to escape.

On the death of the officers, Wadume who was at large fueled the allegations and counter-allegations between the security agencies of which the defence headquarters was forced to weigh in on the matter with a panel of inquiry set up to investigate the matter.

Persons Linked To the Taraba Saga

Others in the charge sheet are Uba Bala aka Uba, Belu Ahmad Suleiman, Dan Ball Bashir Waziri, aka Baba runs, Zubairu Abdullahi Basho, Hafizu Bala aka Maiwelder and Rayyanu Abdul. The Police, in the suit against the defendants, said they “conspired together to commit felony, to wit: acts of terrorism, by attacking and kidnapping one Usman Garba, aka Mayo, at his filling station in Takum, thereby committing an offense contrary to Section 17 of the Terrorism (Prevention) Amendment Act 2013.” 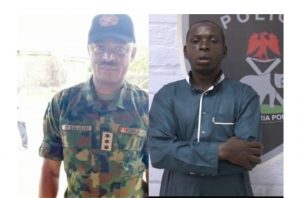 The police began a manhunt for Wadume in March 2019 when a petition was submitted by one Sheriff Umar who resided in Kaduna State. The petitioner said his relative Usman Mayo was kidnapped in February 2019 at Takum Taraba by Wadume.

Source:ROOTSTVNIGERIA
KidnappingNewsSecurity
Previous articleNigerians to Suffer More as Government Seek To Ban the Use of Generators
Next articleWadume Trial stalled as Army Failed To Provide Indicted Captain, Others
© Newspaper WordPress Theme by TagDiv