Jungle Justice, A loss of confidence in Nigeria’s Judicial System?

The phrase “Jungle justice or mob justice” is a form of open extrajudicial killings prevalent in Sub-Saharan Africa, and most notably Nigeria and Cameroon, where an alleged criminal is humiliated, beaten and summarily executed by a crowd or vigilantes.

There is a philosophy that a society is as safe as the security apparatus and infrastructure that is out in place to protect the citizen’s lives and property. However, history has it that people also have a way of protecting themselves and providing the same for the communities they live in. So once threatened, people, form a united force against criminal activities, terrorist, and other felons.

A survey was carried out and it revealed that well over 80% of people who engage in jungle justice believed they took the right decision taking another person’s life for the wrong they did. This is because of the lackadaisical and partial attitude of law enforcement officials towards putting criminals away and getting justice for victims. 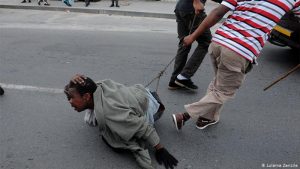 In Nigeria, we have many occurrences of jungle justice and the government has done little close to nothing to stop the menace.

Now, can it be said that the loss of confidence in Nigeria’s judicial system is the reason why in the rural, urban and semi-urban areas, jungle justice, instant judgement and eternal sentence of a suspected criminal is a mob action? This is characterized by mob killing and the setting ablaze of people accused of stealing, kidnapping, raping, rituals (removal of body parts), and the list goes on.

The incidence of Jungle Justice in Nigeria is assuming a worrying dimension. The fact amongst many reasons people take laws into their hands is a failure of the criminal justice system to adequately hold people accountable for the crime they commit.

In Olorunsogo Market in Lagos, somewhere in Airara Market in Aba, or the Kumari market in Kano among other markets and public places, extrajudicial killing is not new. Onlookers witnesses ‘justice’ ‘injustice’ melted on suspected criminals whom the populace are not too sure committed the said crime. 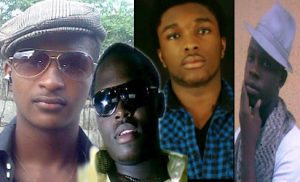 These two jungle justice cases of persons who became victims of circumstance cannot be forgotten in a hurry. The victims lost their lives in a gruesome and heinous act perpetrated by fellow citizens.

About Seven years ago, precisely the 5th of October 2012, University of Port-Harcourt students Chiadika Birnga, Ugonna Obuzor, Tekena Elkana, and Llyod Toku embarked on a journey of no return. The reason, why these poor students were killed was a false accusation from their debtor who didn’t want to pay. While the boys paid a visit to the debtor in order to get their money back, the debtor screamed that the boys were armed robbers. Upon hearing the word “robbers” the crowd gathered very fast and attacked the boys. The innocent students were killed after hours of tortures.

Their pleading fell on deaf ears as they were doused with gasoline, and set ablaze. This was captured in a viral video by the sister of one of them, which horrified the nation, eliciting allegation and counter-allegations. Though a police officer and two people where sentence to death for the killing of the students, the family of the deceased may never get over the trauma, just like the families of the Apo six killing. 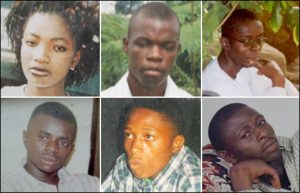 The murder of six young Nigerians by trigger happy police officers in the metropolitan city of Abuja was greeted with a rude shock. The victims who were between ages 21 and 25 did not know it will be their last day on earth.

Seventeen years ago like a flash, when Ifeanyi Ozor, Chinedu Meniru, Augustin Arebu, Anthony Nwokike, Paulinus, Ognonna and Ekene Mgbe, lost their lives to those security agents who were supposed to protect them.. This justifies the assumption that Police and other security agencies fuel jungle justice

The stance of Lawmakers about Jungle-Justice?

In 2017, Senator Dino Maleye sponsored Anti-Jungle Justice Bill which was meant to curtail extra-judicial killing on Nigerians. Moreover, the bill is still pending at the National Assembly and the implication could be more disastrous than Nigeria ever bargained for.

The reason why the National Assembly has not legislated against this barbaric practice in Nigeria could be because it does not affect them directly. Apparently, it is the poor, innocent and defenceless Nigerians that are victims of jungle justice. 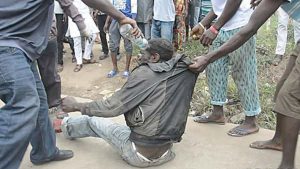 Some known causes of jungle justice are illiteracy, anger due to the economic realities, the flaccid court system, disregard for human rights, Lack of Trust in the Police and other law enforcers are reasons given for jungle justice. Security Expert Ameachi Nwokolo highlight why extra-judicial killings will continue to thrive in Nigeria.

“Over time people have lost confidence in our policing system, the judiciary, the criminal justice system, again there is the lack of awareness, illiteracy playing a lot of roles in all these. Consider a situation where a case is reported to the police and they look the other way because he/she is a known person or has money to influence the case. After some time the police release a known criminal and they become back to haunt the community.

That is very terrifying for the people. So people over time begin to lose confidence. Sometimes in the law court if they have a lot of money these criminals plead their way through and they are set free. This on many occasions influence why people make the choice of taking the laws into their own hand and do justice to a situation on impulse.

Again, because we have a large population of unlearned people, people who are not even aware of the process involved in handling such matters, will join the mob to kill a fellow Nigerian when guilty of an offence or not. Jungle justice a fourth-century way of living”

Are there penalties for jungle Justice in Nigeria?

The spokesperson of the FCT police command DSP Anjuguri Manzah believes the right to a fair hearing should not be trampled upon. He said…

‘Everybody has a right to life and nobody has the right to take another person’s life. It is always good to give people room for fair hearing because when you result in taking laws into our hands what you do is you end up malting unfair treatment. That’s why we are saying as a citizen you have a right to make an arrest nut as you are making the arrest you should immediately involve the police. The police have the responsibility of investigating and putting facts together that will tie the person to the commission of the said crime that will aid the prosecution process.

Legal practitioner Marshal Abubakar explained why there is no justifiable reason to kill a person who has not been tried in the court of law. With exception to self-defence.

“We have had situations where the police or the Army has engaged in extrajudicial killings. This is even very rampant and quite, unfortunately, even under a democratically elected government as we have had in the past. Nobody has a right to killing any person suspected of having committed an offence, even government without a sentence of the court”

In the case of Nasiru Bello, a convicted person was executed by the Oyo State government while his appeal to a higher court was pending. The court was very vehement in the condemnation of such an act and the court termed the killing of the deceased in that particular case as unlawful and an extrajudicial act of killing a person. Extra-judicial killings should not be encouraged in any way. If you arrest people, let them be tried in the appropriate court. Only a few people involved in cases of extra-judicial killings, seen and heard of get prosecuted. Many others who perpetuate this heinous act get away with it.

Can the Narratives be Changed?

A lot of things need to be done in the Nigerian state, from the Overhauling of the police force to enlightenment that must cut across every walks of life including the streets and the school system.

“We need to rejig our policing system because even the police officers that try to upturn justice and try to protect criminals. These are part of the problem that society is facing. Secondly our justice system, you have seen in recent times how our legal system has been fingered to be part of the corruption in the country and people buy justice here if you have the money you might likely not go to jail.”

It is high time that all hand be on deck to ensure proper legislation is been done to curb this act of killing innocent Nigerians in the name of jungle justice.

Enitan Oluwato
Source:ROOTSTVNIGERIA
NewsOpinion
Previous articleCovid-19: How FG, States Can Combat the Spread-CSOs
Next articleRising Incidences of Coronavirus In Nigeria: Should Religious Activities and Public Gatherings Be Suspended?
© Newspaper WordPress Theme by TagDiv