The Nigerian Military has declared that the de-radicalization and reintegration of repentant terrorist are yielding its expected results.

At the Maiden briefing of the newly established Directorate of Defence media operations to coordinate, collate and disseminate information from the theatres of all Armed Forces, the Coordinator of the Defence Media Operations, Major General John Enenche disclosed that remarkable progress has been made in the activities surrounding the de-radicalization operation.

The Operation safe corridor was one of the non-kinetic actions and counter-terrorism strategies that has encouraged Boko Haram terrorists to surrender their arms without been punished.

The Countering violent extremism mechanism was launched in 2014, under the Goodluck Jonathan’s administration.

On checking the website of the National security adviser (ctc.gov.ng), one of the four components of the counter-terrorism strategy and military approach is known to citizens but appears unaccepted. The argument in some quarters has been, even when ‘repentant’ terrorists are released and re-integrated, the society and environment where they emerge from is still the same.

Security experts believe that it is the environment that influenced them to be radicals and that environment has not changed, so there is that possibility the repentant terrorists can go back to their old ways. On the part of Major General Enenche, he said the program is fruitful because

“If you get one the point I am making is that you are getting somebody that will influence about one thousand people. Now we have 606 of them in the camp that will be moved into a re-integration camp in Maiduguri. So by the time you have been able to get this 600 re-integrated, or even about half of them with those that we have re-integrated before, it’s a lot of efforts and that is why I can tell you confidently that there is a lot of confusion in their camps” 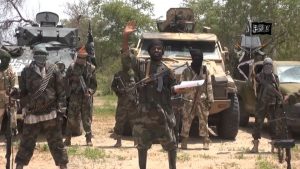 A security analyst, Kabir Adamu believes the involvement of the military has defeated the counter-terrorism strategy. He said…

“I am not comfortable, that the military seems to be sphere-heading the activities of operation safe corridor it should not be a military-led activity. Those who conceived of it wanted a soft approach to counter-terrorism. Now that the military has taken over the whole issue, the whole essence is defeated.” he said.

In November 2019, Operation safe corridor handed over eighty-six Boko Haram child fighters to the Borno State Government with the claim that they have surrendered voluntarily to troops of operation Lafiya dole. From the first Batch of ninety-seven to the second batch of 243 and the third batch of more than 600 repentant Boko Haram fighters are currently undergoing training. 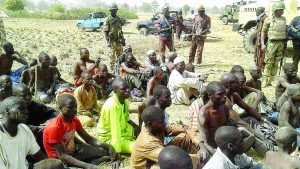 But the Co-coordinator Defence Media Operations said the military alongside other authorities is involved in the counter-terrorism program. He said…

“It is not that we hijacked it, you have a camp commandant, you have a the co-coordinator, Major General Ushafa that they will liaise with after then profile them in Maiduguri, they now separate them into the soft and then the high risk The low risk and high risk, separate them into two. The low risk is the one that will say even if you release me today I am going back.”

Allegations of Terrorists Been Recruited Into the Military

While the Acting Director Defence Information Brigadier General Onyema Nwachukwu through a statement debunked allegations of Boko Haram fighters being recruited into the military, He said…

There were reports in 2016, that the Department of State Services hinted of plans by some members of the dreaded Boko Haram group to join the Army.

According to the then spokesperson of the DSS, Tony Opuiyo, two members of the sect, Ibrahim Abubakar and Idris Audu who were specialists in the making of Improvised Explosive Devices were nabbed before they succeeded in joining the army.

A cross-section of Nigerians also insinuated that the Corporal of the Nigerian Army serving at the Theatre Command Operation LAFIYA DOLE, who killed four of his colleagues and injured two before shooting himself was a Boko Haram Member recruited into the Army. 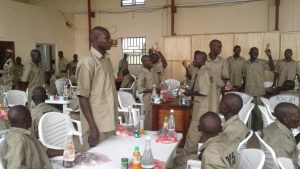 An opinion shared by, Kabir Adamu, a security expert stressed on the need to provide enough details in the counter-terrorism mechanism with the collaboration of all parties. He said…

“We do not have enough information, to determine whether how it was conceptualized, is how it is been carried out. For me, the most important thing is to ensure that the entire concept of counter-terrorism, including military warfare and this soft approach that we are talking about are all implemented. We can’t take one and leave the other we will not get the success. On no account should de-radicalized elements be allowed to come into our security organizations. Eight security organizations in Nigeria carry weapons, on no account should any of them employ, de-radicalized elements”

Only time will determine how successful the de-radicalization operation of these terrorists will be. Nigerians are anxiously waiting to see the outcome.

The Director Defence Media Operations, Brigadier General Ben Onyeoku, while given a rundown of various operations across the country expressed the commitment of the military, he points out efforts made in de-radicalizing Boko Haram Fighters.

“It is important to state that, a considerable number of repentant members of the Sect being de-radicalized, have been rehabilitated and some already re-integrated to the society. The Operation has gone a long way to serve as an eye-opener for members of the Sect, thereby leading them to surrender their arms. Other insurgents and terrorists are being encouraged to also surrender through our means of reaching out, which will be sustained”. He Said.

Operation LAFIYA DOLE in the ongoing counterterrorism/counterinsurgency operations being conducted by the Armed Forces of Nigeria, comprising personnel of the Nigerian Army, Nigerian Navy and the Nigerian Air Force and some other security agencies against the Boko Haram Terrorists/Islamic States West African Province, ISWAP, insurgents in the North-East of the Country, covering Adamawa, Borno, and the Yobe States. The operations commenced in 2009 with the emergence of the Boko Haram activities in the North-East of Nigeria. The fight is still on with attacks on Military Bases in Damboa in Borno State.

“The Nigerian military with all the plans we have, and with all the provisions the Federal Government, the Commander in Chief is making, sooner than Nigerians may expect.”

Brigadier General Onyeoku maintained that the operation has recorded some significant milestones with the clearing of the waters of the activities of the vandals. “The NNPC has recorded a downward trend in their losses from pump stations. These achievements would be consolidated until the entire SS is free of these criminal elements”.

Operation SAFE HAVEN was launched on 21 January 2010 to curb ethnoreligious and communal crises, herdsmen and indigenous farmers feuds, cattle rustling, kidnapping, arson, attacks, killing and maiming and other incessant crises in Plateau and some parts of Bauchi State. It was later extended to Southern Kaduna state to take care of the local ethnic conflicts in the area. The Defence Media Operations holds that the enactment and activation of this operation have engendered conducive conditions in the affected areas. Saying the peace on the Plateau is evidenced by low cases of clashes between farmers and herders. As both sides of the divide live harmoniously and going about their normal activities. Not to forget that killings are still recorded in the plateau.

Operation AWATSE deployed on 5 October 2015 and was activated on 5 November 2015 to curb pipeline vandalism and other criminalities such as cultism, armed robbery, and area-boys activities, in parts of Lagos and Ogun States. The Military said the Operation has successfully dislodged the militants from their strongholds and has successfully mitigated issues of pipeline vandalism and illegal oil bunkering activities. Saying, officers and men of the Armed Forces and other security agencies have worked tirelessly to dislodge the criminals in the Region.

Operation SAFE CORRIDOR was launched on 2nd September 2015 to create an avenue for surrendered insurgents to undergo De-radicalization, Rehabilitation and Reintegration programs. The Operation is on-going in Gombe State and the military says has witnessed tremendous successes as repentant Boko Haram Terrorists surrender from the operations areas, who are in turn being profiled and sent to the Centre for the De-radicalization, Rehabilitation and Reintegration Programme.

Operation WHIRL STROKE (OPWS) was launched on 30th April 2018. It was mandated to address the farmers-herders clashes and banditry in parts of Benue, Nasarawa and Taraba States. The military submitted that the Operation has been largely successful and still on-going and it has been able to unite various factions of disputes with Communities that have been at loggerheads with each other due to misunderstandings that have been brought to round-table for discussions and settled amicably, bringing relative peace to the Region. However, deaths of innocent people, farmer’s herders clash are recorded and it appears the activities of the killer herdsmen bandits continue to thrive in that region.

Operation WHIRL PUNCH was launched on 1 August 2018 to address issues of kidnappings, cattle rustling and other forms of criminalities in Kaduna – Birnin Gwari axis, Kaduna – Abuja Expressway and the general area of Kaduna State, bordering Zamfara, Katsina and Niger States. The Army says the Operation has been successful and still ongoing.

Operation THUNDER STRIKE was launched on 10 May 2019 to curb the menace of armed banditry and kidnapping along Abuja – Kaduna Highway as well as dislodge criminal elements from the Abuja – Kaduna rail line and adjoining communities to restore sanity (law and order) to the areas. Of late there have been reported incidence of killings, kidnapping Armed Robbery perpetuated by suspected bandits, the Army says the Operation has been successful and is still on-going. Nigerians are assured of our commitments to safeguarding the railroad and the environs.

Operation HADARIN DAJI was launched on 10 May 2019 to replace Operation SHARAN DAJI, which operated in its stead from 15 August 2015 to when Operation HADARIN DAJI was launched. These operations were launched to curb the menace of banditry, kidnapping, cattle rustling and sundry criminalities in Zamfara and contiguous states of Sokoto, Katsina, Kebbi and part of Niger States. The military said the activities of the criminal elements there have been reduced to the barest minimum.