The increasing number of Coronavirus epidemic has forced Kogi and Rivers States to shut down their land and sea borders.

Rivers State Governor, Nyesom Wike in a statewide broadcast announced that air, sea and land routes into the state will be closed to traffic, beginning 6am, Thursday, March 26, 2020.

Wike said that the measure became necessary after Rivers state escaped recording a case of the global pandemic.

The Governor said, “But for the vigilance of security agents who, acting on a tip-off prevented an infected person from boarding a flight from Abuja to Port Harcourt.

“The infected person beat all security measures that were put in place at the Nnamdi Azikiwe International Airport, Abuja and Abuja and was to sneak into Port Harcourt before security agents stopped her.

“Based on this alarming Information, the State Security Council met yesterday and reviewed measures already put in place and decided that there was urgent need to adopt stringent measures to protect those living and doing business in the state from the virus.

“The council has therefore taken the following painful decisions: With effect from 6pm on Thursday, March 26, 2020, the Port Harcourt International Airport, Omagwa will not be open to air traffic. While we may not have the right to stop flights from entering Port Harcourt, we cannot allow anybody coming from the airport to enter our State. We are confident that the Federal Airports Authority of Nigeria (FAAN) and other federal agencies will cooperate with us.

“All Land and Sea Borders will be closed.

“Let me reiterate that the situation we are facing requires drastic measures because coronavirus has ravaged many countries.

Governor Wike said that the new measures will be in place until further notice.

The State Government had earlier banned all forms of open worship including crusades and vigils, public Burials and weddings.

The government also directed that public parks, night clubs and Cinemas to close down.

Kogi, a North-Central State which shares boundaries with ten other states in the country has shut all entry points into the state as a measure to prevent the entry of the COVID-19 epidemic into the State.

In a statement signed by his Commissioner for Information, Kingsley Fanwo, Governor Yahaya Bello also directed that the shutdown of all educational institutions in the state. 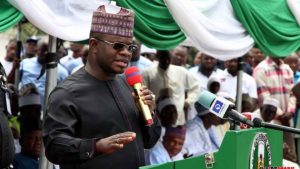 “All entry points into Kogi State (land and waterways) are now closed. Entry and transit by any vehicle is subject to a successful health check of all passengers. To prevent avoidable delays, which may extend to preventive quarantining, persons with any disease condition which mimics CORVID-19 symptoms, including elevated temperatures, should have a medical report from a reputable hospital/medical practitioner explaining their condition before venturing through the state”.

The Governor also directed that all Civil servants “on Grade Level 1-13, except those on specified essential services (medical personnel, revenue officers, law enforcement) are to remain at home and away from work till advised otherwise.

He also added that the social, cultural and religious activities should be suspended adding that essential activities must not have a crowd beyond 5 persons.

The Presidency has scaled down the coverage of the State House by media houses to only 13 in the wake of coronavirus spread to the seat of power.

The restrictions will be in place “until further notice as the coronavirus incident indicates.”

It said the decision was in compliance with the “social distancing” rule and accommodation of not more than 50 persons at any gathering.

The lists of journalists covering the activities of the Presidential Villa has been pruned down to 13 following the confirmation that the Chief-of-Staff to the President, Abba Kyari tested positive to COVID-19.

According to a statement by the Director of Information, State House, Attah Esa, 13 media houses allowed to have access to the Villa henceforth are Deutsche Welle, NTA, Channels TV, TVC, FRCN, VON, NAN, The Sun, ThisDay, Leadership, Daily Trust, The Guardian and Vanguard.

He said the Presidency had scaled down the number of staff in other departments as well, noting that “over 100” correspondents gathering for work daily was not in line with the social distancing rule and overcrowding.