26 Days into COVID-19 Crisis: When Will Nigeria Wake up to the Sobering Reality?

The Coronavirus outbreak, which originated in Wuhan China, has infected more than 276,000 people worldwide. The effect of its spread has touched businesses and economies around the world. Investors are afraid that the spread of the virus will destroy economic growth, and actions taken by the government may not be enough to stop the decline. This is absolutely true!

Central banks in many countries have cut interest rates; the travel industry has been damaged badly by the spread of the virus, with airlines cancelling flights or cutting down some, and tourists cancelling business trips and holidays. The panic attacks and the need to isolate are also having a destructive impact on restaurants, hotels, and recreational centers.

Investor Ray Dalio, the founder of Bridge-water Associates estimated the corporate losses of the U.S.A to be $4 Trillion. CNN reported the virus could cost China’s economy $60 Billion this quarter, and industries in the UK revealed multi-million Pound losses due to the pandemic nature of the corona virus. 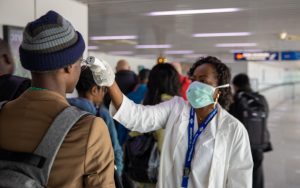 In Nigeria, the price of crude oil, which is the backbone of the country’s economy, is already trading below the Federal Government’s benchmark budget for 2020. Also, with the stock markets crashing, travels and other economic activities slowed or stopped, real estate sales will most likely take a hit in the coming weeks and months.

Looking at what other countries are doing to help their citizens survive the pandemic, the Prime Minister of Canada, Justin Trudeau, said Canada would provide economic aid packages to help Canadians amid the outbreak. Sheikh Mohammed, the crown prince of Abu Dhabi and Deputy Commander of United Arab Emirates reassured citizens that the country had enough supplies of food and medicine to curb the challenges posed by the covid-19 outbreak. In early March, Italy received essential supplies from China and the UK promised that the vulnerable will get benefits.

German Chancellor Angela Merkel put herself in quarantine as a precaution after coming in contact with a doctor who tested positive for the virus; she also banned gatherings of more than two people. Officials in Rome decreed a halt to almost all domestic travels while Spanish Prime Minister, Pedro Sanchez called for the state of emergency in his country to be extended for another two weeks. European leaders are scrambling to enforce unprecedented restrictions on the movement of their populations in a desperate attempt to prevent their health-care systems from being overwhelmed by the coronavirus pandemic. Ghana deployed over 1,300 sprayers to disinfect markets in Accra 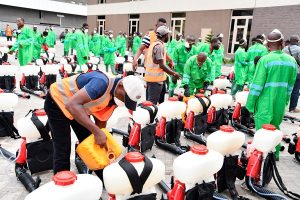 Now the big question is does Nigeria have such plans? Or do we have any country who would help us with supplies should it get any worse and lead to a total lock-down?

Nigeria has confirmed 40 cases of the coronavirus since its outbreak and 1 death was recorded on Sunday, March 22nd, 2020. Travel bans have been placed, Airports, places of worship and schools have been shut down, and people have been asked to stay at home. The country is just a few steps away from total lock-down and self-isolation in suspected cases, those who have the capacity are panic-buying and stocking up in preparation for the worse. But have we thought of what the country will be like when we eventually get to this stage?

In the case of a total lock-down, especially in a country like Nigeria, more than half of the population cannot afford to buy supplies that could last for a month or more. An average Nigerian with a salary of N30,000 cannot afford to do this, especially as prices of staple foods and other items will outrageously increase, not to mention the unemployed population. What will happen when markets, restaurants, shops, kiosks are shut and even hawkers have to isolate? Anarchy and Social vices will prevail, desperation would cause a lot of harm, the have-nots will steal from the haves, and people would commit crimes believing they are doing the right thing.

On March 22nd, 2020, the Inspector General of Police, M.A Adamu released a press statement against the backdrop of the covid-19 health threat. He directed all zonal AIGs and Command CPs to desist from unnecessary arrests and detention of crime suspects, except for serious cases such as terrorism, homicide, armed robbery, and other non-bail able offences. He also asked citizens to avoid social visits to police stations but rather, call the numbers of their command control rooms. 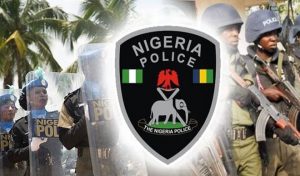 In as much as the Force need to protect themselves as well, this move may give room for more crimes as minor as bag snatching, pickpocketing, and domestic robbery. What happens in a case where the command control room number is not reachable and one cannot visit the Police station for such cases?

As long as we should be wary of the coronavirus, what is more, worrisome is the lawlessness and insecurity that will follow. The Nigerian government has not promised anything close to what other countries are doing for their citizens. Amidst 3 confirmed cases in Abuja, the nation’s capital, doctors went on strike due to the health threat posed by the coronavirus and the Federal Government’s refusal to pay their salaries for 2 months. If health workers are scared, who will attend to the infected? Remember that China was able to fight this outbreak because all doctors and health workers worked tirelessly to reduce the number of deaths.

The most recently confirmed case in the FCT says Abba Kyari, Chief of Staff to President Buhari, who returned from Germany on March 14th has tested positive to covid-19. The report says he did not self-isolate as the NCDC directed and attended a meeting in Aso Rock on Sunday. Clearly, our leaders are not living by example. The Federal Government ought to have paid salaries for the month and shut down after the first few cases. Now, the virus is spreading and more people are getting infected. The time for the government to think outside the box is now.

This is not the time to shut down without a long term plan for citizens, nor the time to hide facts or data of prominent people who have contracted the virus. For once, the Nigerian government should look out for the masses because the difficult season is fast approaching and a lot of people that are vulnerable will be left miserable.