The Nigerian Police has slammed a sixteen count charge on Hamisu Wadume, Captain Balarabe and eighteen others. The Force through the Inspector General of Police charged Wadume and his suspected cohorts on counts bothering on terrorism, murder, kidnapping and illegal arms running.

This development is coming six months after Wadume was arrested in August 2019 and solders of 93 Battalion in Takum Taraba state allegedly aided the escape of the notorious criminal.The incident led to a face-off between the Nigerian Police and the Army. Five police officers were injured, three policemen and one civilian were gruesomely killed as shown in a viral video that horrified the nation.

Others in the charge sheet are Uba Bala aka Uba, Belu Ahmad Suleiman, Dan Ball Bashir Waziri, aka Baba runs, Zubairu Abdullahi Basho, Hafizu Bala aka Maiwelder and Rayyanu Abdul. The Police, in the suit against the defendants, said they “conspired together to commit felony, to wit: acts of terrorism, by attacking and kidnapping one Usman Garba, aka Mayo, at his filling station in Takum, thereby committing an offense contrary to Section 17 of the Terrorism (Prevention) Amendment Act 2013.” 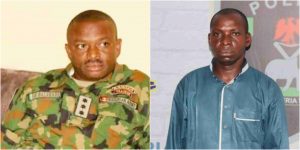 On the 12th of August 2019, the arrest of Army captain who ordered the killing of the policemen made headlines. The Army captain was said to have exchanged over one hundred and sixty-one telephone conversations with Wadume. The captain was shielding Wadume and getting money in return. The Ibi Divisional police officer was also not spared as it revealed Wadume had discussions with him on phone.

Beginning Of the End of a Kingpin

Wadume who had been on the wanted list of the police for crime and criminality was first arrested in Taraba by the IGP’s intelligence response team. While been transported to Abuja on the 6th of August 2019, when the bus conveying the police officers and the kidnap kingpin was attacked by troops of 93 Battalion in Takum Taraba state. Wadume alleged that a sitting Governor gave him six million during the campaign for elections. The kidnapper who started as a fish farmer ventured into arm business, and his clients being kidnappers. He also owns a transport business and equal is a political thug. 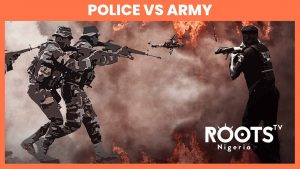 The Man Hunt for Wadume

The manhunt to arrest Wadume started in March 2019 when a petition was received from one Sheriff Umar based in Kaduna state. The petitioner said his cousin Usman Mayo was kidnapped on February 15, 2019, at Takum Taraba, alleging Wadume demanded 200 million Naira for his cousin’s release. After the payment of One hundred million Naira was made. Wadume did not release his captive, Wadume was said to have been hell-bent on collecting the said 200 million he demanded. The victim was eventually killed.

While it has been alleged that Wadume was been conveyed to the Force headquarters and was rescued by the Army captain who orders the killing of policemen. A security expert believes that the high profile criminal Wadume had the backing of security operatives accused of working with him and given him the sense of safety and that he was untouchable.

Judging from the names been charged to court, it appears it is not only Balarabe or soldiers of the 151 Battaliontask force, officers of the police who are the worst hit from the attack also have a case to answer. One would wonder why over dozens of security officials appear culpable. Will an average Nigerian have confidence in the Nigerian security operative?

Looking at it from Wadume’s confession that he had links with politicians in time past and before he was recently arrested. He said…

“I went into crime when some politicians came for me. I received a lot of politicians who were vying for political offices that I had spiritual power to enable them to triumph in their elections. As a youth leader, the Governor met me and I promised to work for him. A sitting Governor gave me 2 million Naira at first, we exchange phone contacts. Another 4 million was given to me”.

At a time Wadume claimed he was not a kidnapper but a political thug saying that he received a total sum of 13 million Naira from the ruling party APC during the 2019 presidential election. These weighty allegations appear to have been swept under the carpet and not followed by an investigation.

When the kingpin loses His Kingdom

Following the killing of three officer’s and one civilian, leaving five other with various degrees of injury in Ibi Taraba, the police had been in a massive manhunt for Wadume. However, two weeks after the death of the officers the police In a press statement dated the 20th of August 2019, reveled it had arrested notorious kingpin who was allegedly released by his ‘rescuers’ after the restraining handcuff was destroyed. Wadume was said to have fled to Kano, he also claimed to have been set free by the Army saying the soldiers opened fire on the policemen.

Now that Wadume Has been charged, only the Law court can determine his punishments. But worthy of note is the array of business owned by Wadume which may have been lost since his absence.