In northern Nigeria, the situation is very depressing, with a net attendance rate of 53 percent. Getting out-of-school children back into education poses a massive challenge.

All children, no matter where they live or what their circumstances, have the right to quality education. According to UNICEF, “In Nigeria, about 10.5 million children are not in school even though primary education is officially free and compulsory”

Aisha Buhari, the Wife of the President, says the population of out-of-school children in the North is disheartening.

She said this at an occasion for the inauguration of her pet project, Future Assured Youth Education and Empowerment Programme, which would train 750 young persons in Adamawa. She emphasized that the situation required the government’s urgent attention.

She said, “the case is most disheartening in the northern states where insurgency, poverty and our socio-cultural norms have played key roles in further worsening what is left of the ruins of dilapidated structures, insufficient and poorly motivated teachers at all levels.”

She added that “education deprivation in northern Nigeria was driven by factors such as economic barriers and socio-cultural norms and practices that discourage attendance informal education, especially for girls”.

Mrs Buhari, who was represented by Dr. Abba Tahir, Vice-President American University of Nigeria, Yola, called for continued actions to tackle the phenomenon of out-of-school children in the country.

She said, “We cannot abandon them. We must realize that all development issues are interrelated and unless we figure out a way of addressing the root causes in education, health, nutrition, agriculture, and economic empowerment, holistically. We may never create a balance in our development.” 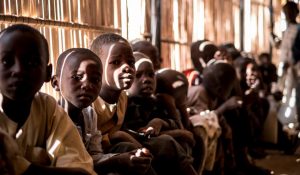 One in every five of the world’s out-of-school children is in Nigeria.

Even though the Nigerian government said that primary education is officially free and compulsory, yet well over 10.5 million of the country’s children between the ages of 5-14 years are not in school. Roughly 61 percent of 6 – 11 year-olds regularly attend primary school and only 35.6 percent of children aged 36-59 months receive early childhood education.

In northern Nigeria, the situation is very depressing, with a net attendance rate of 53 percent. Getting out-of-school children back into education poses a massive challenge. Gender, like geography and poverty, is an important factor in the pattern of educational marginalization.

States in the north-east and north-west have female primary net attendance rates of 47.7 percent and 47.3 percent respectively, meaning that more than half of the girls are not in school.

The education deprivation in northern Nigeria is driven by various factors, including economic barriers and socio-cultural believes and practices that discourage attendance informal education, especially for the girl child.

Statistics Don’t Lie – UIS Data on Out of School Children

As countries strive to achieve universal primary and secondary education by 2030, the UIS is providing the data and analysis needed to reach the children and youth who remain excluded from education.

Through its website, publications and data visualizations, the UIS aims to strengthen the availability of detailed internationally-comparable data on out-of-school children and youth, to make it possible to better identify who they are, where they live and the barriers they face.

In addition to its regular survey operations, the UIS works directly with countries to help them produce data on out-of-school children and youth, as well as interpret and use such data for policy-making. As part of these efforts, the UIS contributes to the development of methodologies needed to produce data for monitoring the targets of the SDG 4 – Education 2030 agenda. 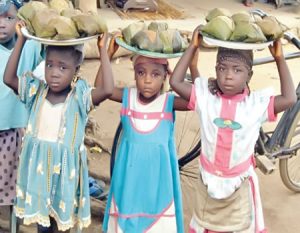 Girls are more likely than boys never to set foot in a classroom, despite all the efforts and progress made over the past two decades.

According to UIS data, 15 million girls of primary-school-age will never get the chance to learn to read or write in primary school compared to about 10 million boys. Over half of these girls – 9 million – live in sub-Saharan Africa.

In north-eastern Nigeria, 2.8 million children require education-in-emergencies support in three conflict-affected states (Borno, Yobe, and Adamawa). In these States, at least 802 schools remain closed and 497 classrooms are listed as destroyed, with another 1,392 damaged but repairable.

UNICEF’s education program aims to support the government in achieving SDG 4 by 2030 through improved planning and by addressing some of the systemic barriers that hinder the implementation of an effective education strategy.

Our program advocates for education to be prioritized and targets children who are least likely to receive an education. The expected outcome of the program is that all children access and complete quality education, within a safe learning environment, gaining the skills and knowledge for lifelong learning.

This work will be achieved by creating an enabling environment for education, improving the quality of education, increasing demand for education, and humanitarian assistance, including through ensuring: