The angry passengers have demanded compensation for abandonment from the 100 years old National Carrier.

“The motto To Fly. To Serve. It’s part of the DNA of British Airways. It is on our coat of arms, and it is worn in crew uniforms. And it has real meaning and resonance for today. It encapsulates our expertise for flying and our commitment to customer service. It describes our purpose.”

However, on Tuesday, 11th February 2020, when passengers aboard British Airways from London finally left for Lagos after two days of cancellation and rescheduling because of bad weather, little did they know it was the beginning of a nightmare. This is coming from an airline you never could imagine will treat their customers this way.

“Tuesday we started the journey, it was a turbulent one seriously, for over an hour, I have never had it this bad, and it was really bad. On getting to Nigeria air space, we were told that it was very foggy and that our government did not have fog light. They were ill-equipped for it. So they brought us to Ghana.”

The passengers on getting to the airport in Ghana against their will, were met with the most inhumane treatment by the airline operator.

“After 3 days of endless wait, British Airways asked us to come and pick our luggage. They gave us two options – either to return to London or find our way to Lagos. A lot of people are broken. Imagine the people on wheelchairs, nursing mothers, old people, children etc. I am very upset and rather than speak to us, they asked us to speak to the ground staff. Who do you blame? The Nigerian government.”

The nightmares faced by passengers was not only caused by bad weather but by the bad decisions taking by the British airways not using the Nnamdi Azikiwe International Airport Abuja as a landing option but chose to go to Accra Ghana instead.

Meanwhile, addressing diversion of incoming international flights to neighbouring countries, the Nigerian minister of aviation, Hadi Sirika said that the decisions were for those of the airlines which the ministry had no control over.

He also said that efforts is been made by government to ensure that the Category 3 instrument landing systems installed in Lagos in November 2019, which was not functional because it has not been calibrated is been fixed immediately. Hence, some airlines do not want to risk landing in low visibility in the evening and night.

For this negligence by the Nigerian government, passengers lost more than their time

“There are people on this flight who started their journey on Saturday, the people coming from the US for instance……a passenger here started on Saturday and is billed to leave on Friday at the end of the day she won’t be able to achieve what she came for” A passenger revealed.

Another British Airways flight from the US and London reportedly also rerouted its passengers to Abuja as against Lagos similarly for lack of Fog light.

Their experiences were nothing to write home about either. Inadequate accommodation and transport were made by the airline with no care for the sick and aged.

“British Airways just abandoned us here. They did not even provide transportation for some of us from the airport. They said we should come to the Sheraton hotel, we all came here but they made arrangements for less than 200 people out of the 321 passengers, we all slept outside and we have elderly people here. We are on medication and they said paramedics will be here, but there is nothing like that.”

The angry passengers have demanded compensation for abandonment from the 100 years old National Carrier.

British Airways wasn’t the only airline to divert its passengers due to bad weather to other destinations but were the worst in managing its passengers.

The Director-General of the Federal Competition and Consumer Protection Commission, Babatunde Irukera said the commission will issue summons to the airline.

One passenger lamented; “We are not accepting this, we have been treated like slaves in our own country.”

Cancellations affected flights from Qatar Airways, Emirates, Delta Airways and KLM. Virgin flights were, however, not affected due to advanced onboard technology.

In responding to the plight of the passengers, Minister of Aviation, Sen. Hadi Sirika, said that the decisions were for those of the airlines which the ministry had no control over. 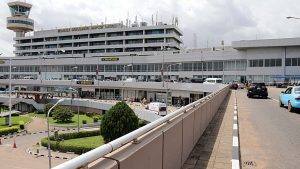 The devastating and traumatizing experience Nigeria bound passengers face has come to stay as the federal government has refused to maintain the landing systems at its international and local airports.

“Just to remind us that aviation in other continents has moved on. Airports have achieved 100 percent self-check-in services. Airplanes land in zero visibility. Non-compliance with regulations is detected by remote monitoring. Yadudu said.

He, however, said he expects an improvement in 2020 as the ministry was allocated N52 billion in the 2020 budget.

Lack of funding has crippled many of the developmental projects for the aviation industry hence experts have advised that there should be a departure from government monopoly airports to competitive airport companies of Nigeria as private sector finance options for the industry will enable it to focus.