Alex Ogbu: The Untold Story of Journalist Killed In the Line of Duty

Alex Ogbu was murdered in cold blood on the 21st of January 2020, the back of his head broken and his brain tissues sticking out.

Until Journalist Alex Ogbu was killed in the line of duty, on the 21st of January 2020. He was a reporter and political editor with Regent Africa Times Magazine. He resides in the Bwari area of the FCT, about 40 kilometers from the city center of Abuja.

His sudden untimely death left behind a toddler who has no clue that her father was no more and a grieving wife who will miss her husband for a very long time. In the deceased seating room and encrusted on the wall is a mug shot of an article written by the late journalist, his wedding picture and another photo of the once happy family of three.

Francisca Ogbu wife of the late journalist recounted the ordeals that led to how she got to know her husband had died.

“Usually by 4:30, at 5 pm my husband returns from work. I had made his food. We love eating together, so I decided to eat chin-chin while I waited for him to come back so that we will eat together” 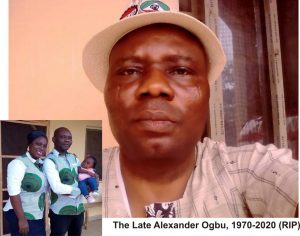 Suddenly her phone rang and it was her husband’s number, the person on the phone asked her to be at Utako Police Division, it was then she came face to face with the reality that the unimaginable had happened. Her Husband Alex Ogbu had died. Francisca rushed down to the National Hospital Abuja where her husband was taken to.

“I asked them to let me see his corpse, they refused, they were telling me he was at Emergency, and they were working on him. I replied, if it is an emergency, and you are at the Mortuary, it doesn’t add up. At least I’m not that stupid. They said instead of resorting to crying I should be praying there was no police, just my sister, the husband, and the mortuary people”

She recounted waiting at the hospital, till about 10:30, 11 pm to see her husband until a mortician give her a signal to come into the mortuary. She said “I ran inside the mortuary not knowing which direction just looking for what was mine and there was my husband, there was the love of my life, there was my king lying still, blood all over his face back of his head broken, and his brain tissue sticking out I laid down, I held him, I cried him I laid down on his chest and I told him good night”

The Police Side of the Story

“The FCT Police Command has successfully restored calm around Berger round-about after a violent protest by members of the proscribed El-Zakzaky Islamic Movement in Nigeria (IMN) who went berserk on Tuesday 21st January 2020 and were attacking innocent citizens and police operatives with dangerous weapons.

“I am somebody that if I walk anywhere if I see the police I have to have that confidence. But in this present situation in this country, I am afraid of police more than the ‘so-called’ Boko Haram. I am afraid of the police more than a bandit. Because there is so much evidence, not allegations but what is truly happening in this country. Are you talking off people they killed on highways? Or you make mention of innocent people”

Sister to the deceased in her words said…

“I need justice; I need the whole world to help me tell the government to tell me the truth. It is the fault of the police. Police are the people that kill my brother. Alex Ogbu journalist. He was on his way home from work. When he was shot by police and they are denying” 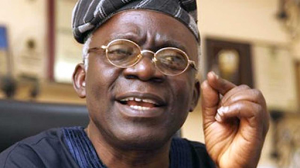 Human right lawyer and Senior Advocate of Nigeria, who doubles as the counsel of IMN Femi Falana upon hearing the incident, wrote to the FCT commissioner of police, seeking an inquest into the killing of Alex.

‘‘Since the said Mr Alex Ogbu died in such a circumstance as to make a holding of an inquest necessary or desirable and particularly since the extrajudicial killing was carried out are Berger Area of Abuja within your jurisdiction and sphere of authority, we request that you employ your good office to cause an official notification, to be issued to the coroner concerning holding an inquest to the cause and nature of death of Alex Ogbu’’

Legal practitioner Marshal Abubakar also weighed in on the matter. He said…

“It is quite unfortunate, we are where we are today, where some persons in government, who believe they have the paraphernalia of state apparatus, who believe they are in charge of governance in the country. To now use that same instrumentality, which they have to use to protect the people as a means of a clampdown against those same persons they should be protecting”

During the Shi’ite police face off at the central Area in July 2019, the Deputy Commissioner of Police in charge of Operations FCT commands Usman Umar was shot on the head. The officer died at the hospital.

The picture that went viral on social media revealed the officer had two bullet holes to his head one at the back, the other at the side. Similar to that of Alex Ogbu who was said to have sustained gunshot wounds which lead to his death. Pictorial evidence also attests to this. One would wonder why the two victims were shot on the head and obviously at close range. 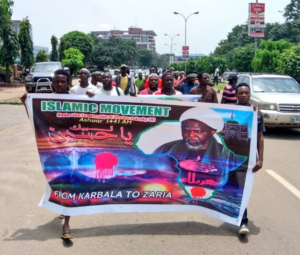 The Chairman Nigerian Union of journalist, FCT chapter, Emmanuel Ogbeche while reacting to Alex Ogbu’s death noted that the safety of journalists requires the stringent urgent intervention of government both at the federal and state levels. He notes that…

“All other tiers of government have not taken this into cognizance, we will continue to demand safety and protection of journalist and we have said we are going to hold every principal actor that is responsible for the intimidation harassment and the death of journalist responsible. We are going to engage diplomatic channels to ensure that those persons and their families are barred from traveling out of this country”

Nigeria before the International Community

The world Press Freedom Index released by reporters without borders put Nigeria amongst the worst places to practice journalism in the world. Nigeria holds 120 out of 180 on the Press Freedom Index securing the 35th position, while Norway is ranked as the best country in terms of press freedom and Turkmenistan the worst.

According to reporters without borders…

“It is difficult to cover stories involving politics, terrorism and financial embezzlement by the powerful. Journalist are often threatened, subjected to physical violence, or denied access to information by government officials, police and sometimes the public itself”

While fifty years old Alex was finally laid to rest on the 7th of February at his home town in Ogbadibo Benue state. The questions begging for answers is, will his killers be found? Will he get justice? Will journalists continue to suffer the same fate as their colleagues?