Reprieve has come the way of Citizen Agba Jalingo as the Federal High Court, Calabar granted him N10 million bail after 174 days in detention.

Jalingo, who is the Publisher of CrossRiverWatch was arrested on August 22, 2019, for treason and over an allegation that the Cross River State Governor, Ben Ayade diverted N500 million belonging to the state.

Before Thursday’s sitting, Agba Jalingo had been denied bail twice. In his ruling, Justice Sule Shuaibu granted the journalist N10 million bail following an application from his lawyer, Attah Ochinke.

The court held that those standing as sureties for the journalist must make a refundable deposit of N700, 000 to the court registry for the bail to be perfected.

While it was reported that Agba Jalingo is facing trial over an alleged report that the Cross-River State Governor, Ben Ayade diverted N500 million belonging to the State for personal use, the Governor stated that he had no hand in the trial of the journalist. 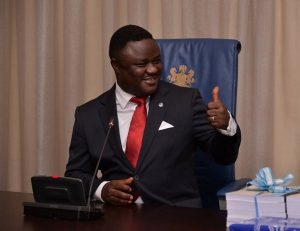 While addressing State House Correspondents in January, Ayade said Jalingo was being charged for treason.

“In court, it is Federal Government versus Agba Jalingo, not Cross River State,”

“You are seeing him as a journalist, but he’s not, he’s the chairman of Sowore’s party in Cross River State so he’s a politician. He has a primary calling, which is journalism.

“Once he started the campaign to overthrow the government of President Buhari, he ceased to be seen from the point of a journalist because he has become the state chairman of a party.”

“Please ask Agba Jalingo, that CrossRiverWatch, the first person to give him money to set up the office was me. His official vehicle, it was me. I don’t have to list all of these, he knows that I have funded and supported him, but journalism stops where blackmail becomes part of your strategy.

“Today you need something, then Ayade is a good man and you start writing all the good things, but if I take my phone and show you our WhatsApp communication, you will call me a godly man. Today I need money to set up a computer school, tomorrow I need money to feed my birds, the other day I need to be INNOSON’s sole distributor in Cross River State, I do all that.

“But when I don’t get a thing right you go to social media and write something as careless as Governor Ayade has taken N500 million to Russia. You impugned my father’s name, my character, my family name, for just a personal request that I’ve not met, out of many that I have met.

“Please for once, put yourselves in my shoes. All I simply did was to stay out of the issue,” the governor said.

On November 14, 2019, an online newspaper, The Cable, had published leaked audio where a judge of the Federal High Court, Calabar Division, Simon Amobeda, had boasted that the life of Agba Jalingo was in his hands.

Justice Amobeda, who denied Jalingo bail twice before he recusing himself from the case was heard in the leaked audio saying some critical things about the journalist and his lawyer, Adeyinka Olumide-Fusika (SAN)

“I told the young man (Jalingo), your life now is in the hands of the court,” He was heard saying.

On Adeyinka Olumide-Fusika, Amobeda said: “In the three times he appeared before the court, the first time he was to bring down the court, the second time he was gentle, the third time yesterday, he was shouting on top of his voice. I refuse to be intimidated.

“Late Gani Fawehinmi walked out on the tribunal in Ogoni matter. What happened? The matter went on and Ken Saro-Wiwa was convicted and sentenced to death.” He said

After the publication, Jalingo wrote to the Chief Judge of the Federal High Court in Abuja where he expressed doubt about getting a fair trial from Justice Amobeda.

Amodeba would later refer the case to Justice Sule Shuaibu after being accused of bias.

The Journalist, Agba Jalingo is expected to answer fresh charges at the next adjourned date which he had already pleaded not guilty.

The fresh charges preferred against him bordering on terrorism, treasonable felony, cultism, and attempt to topple the Cross River State Government.

Justice Shuaibu adjourned the matter to April 6, 7 and 8, 2020 for the prosecution to open and close its case.