Akan Bernard, a suspected serial rapist, has been paraded among 46 other suspected criminals by the Police in the Federal Capital Territory Abuja.

Bernard allegedly attacked and rape his female victims in the bush around Area 3 junction in the FCT. He confessed to committing the act after one of his victims recognized him and alerted the police.

According to the Police, “On 17th January 2020 at about 1900hrs, following a complaint, one Akan Bernard, a serial rapist was arrested by Police operatives from Durumi Division for attacking and raping his female victims in the bush around Area 3 junction. The suspect who operates mostly at night and has confessed to the crime was arrested after one of his victims on sighting him alerted the Police patrol who immediately swung into action and arrested him. Meanwhile, another victim has also identified the suspect as the person who raped her some time back”. Police said.

Aside from Bernard, 46 other criminal suspects were paraded by the FCT Police Command.  Exhibits recovered include, nine firearms, A hundred and twenty-five ammunition, ten cutlasses, five pair of scissors, seventy-four phones, A Lexus Jeep, two long knives, A tricycle, some quantities of dried leaves suspected to be Indian hemp, plasma TV, Hammer, and Stabilizer.

According to the Police, offenses committed by these suspects range from culpable homicide, armed robbery, illegal possession of firearms, cultism impersonation car snatching among others. 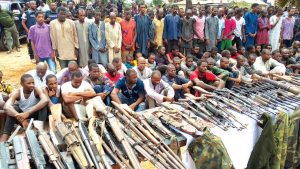 The arrest of Suspected Armed Robbers/Cultists

According to the Police, on 15th of  January 2020, following a sting operation by operatives of the Special Anti-Robbery Squad, eight suspected armed robbers operating around the National Mosque Abuja were arrested.

The Command said the operation is targeted at ending the activities of criminals and hoodlums who hibernate around the national mosque to attack and rob unsuspecting members of the public. The arrested suspects are Aliyu Abubakar 20years, Musa Ado 35years, Abdul Kabir 17 years, Aminu Haruna 14years, Adam Awal 16years, Zayyad Isah 30years, Ismail Abubakar 16years, Yakubu Musa 15years all male of no fixed address. The exhibits recovered from the suspects include one (1) pair of scissors, some quantities of dried leaves suspected to be Indian hemp, one (1) Samsung S8+, and one Infinix smartphone.

The Arrest of Wanted Armed Robbers

25-year old Peter Emmanuel had been on the wanted list of the Police for allegedly masterminding different robberies within Abuja metropolis. however,  on the 3rd January 2020 following a discreet investigation, Police operatives from Karu division arrested and recovered two locally made pistols from Emmanuel but his gang members were said to be at large.

The arrest of one Musa Muhammed who allegedly receives and sells items stolen by the gang brought to limelight some other hideous crimes. Meanwhile, the Police said it is making an effort to arrest other members of the gang who are still at large.

The arrest of Suspected Car Snatcher/ Recovery of Firearm

Eze Ifeanyi, a suspected car snatcher was also paraded by the Police. according to the Police, on the 14th January 2020, Police Operatives from Kubwa Division, following a distress call arrested Ifeanyi while trying to snatch a Lexus Jeep from his victim at gunpoint. The suspect was arrested at the Gbazango area of Kubwa. The exhibits recovered from him are one locally made pistol and one Lexus 300 jeep.