While Nigerians were distracted mourning the death of NBA Champion Kobe Byrant on the 26th of January, Dooior James was butchered by suspected Fulani herdsman for daring to seek compensation for the invasion of his beans farm in Pangari Village of Bali local government area of Taraba state.

This was the beginning of the clash between Fulani herders and Tiv farmers in Pangari village on Sunday.

Infuriated by the constant invasion and killings by Fulani herdsmen, Tiv kinsmen and brothers to James retaliated and killed the Fulani man. A resident, Pius Gura revealed that about 6 pm on Sunday, the brothers of the Fulani man, who was killed also, mobilized and attacked the village of the farmer, killing one person and setting so many houses ablaze. 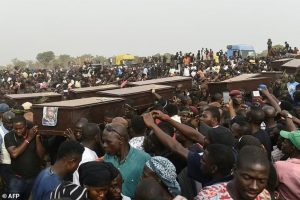 On 17 June 2017 one of the deadliest farmer-herder conflicts in Taraba state began lasting for four days and leaving in its wake dozens of dead bodies.

“My wife was slaughtered, they opened her stomach and brought out the baby and slaughtered it. My kids were slaughtered also. I was with their dead bodies for three days in the bush before the soldiers came. My father was burned in front of the mosque where he prayed. They killed him there and burned him.”

This account is nothing compared to that of over 3,000 realities of families whose loved ones have been lost to farmer/herders clash.

But for the confirmation of the clash by the Caretaker Chairman of Bali Local Government Council, Prince Musa Mahmood, the three lives that were lost on Sunday are inconsequential to the larger politics of if there is a cabal or not, if the president and vice president are buddies and if one man’s opinion on what he knows about those in government matter or not.

Names like Dooior James can never top trends or cause a national outcry, No, we have become immune. If the president does not deem it necessary to acknowledge the killings by the Fulani herders let alone take decisive actions against them, and we can sit silent trending issues oceans away from us while ignoring the fire on our mountain, then that poor farmer in Taraba state has no hope.

Source:ROOTSTVNIGERIA
NewsSecurity
Previous articleRerun Elections: Here are the Winners and Losers
Next articleHerdsmen Attacks: A Killing Too Many
© Newspaper WordPress Theme by TagDiv