The National Drugs Law Enforcement Agency (NDLEA) has revealed how its personnel intercepted a Dangote truck loaded with 1 ton (about 1000 kilogram) of Indian hemp in Abuja.

Olufemi Oloruntoba, the Chief-of-Staff to the Chairman and Chief Executive of NDLEA, Muhammad Abdallah in an exclusive chat with Roots TV Nigeria, disclosed that despite the paucity of funds affecting the agency, its personnel is uncovering new methods being adopted by drug peddlers to ferry the illicit substances across the country.

“The criminals are always trying to be ahead of law enforcement agencies, for example, two weeks ago, a mobile police officer was arrested in Yobe State, he was carrying 59 kilogrammes of Tramadol, taking it to Maiduguri. Meanwhile, the owner of the Tramadol boarded a flight, Max Air, he boarded the flight so that when he gets to Maiduguri, the Police officer will hand over the drugs to him and they’ll take it to Gwosa and you know Gwosa is the home of the insurgents. So you can see that the criminals are always looking for ways to beat the law enforcement agencies.

“Also, our officers in Gwagwalada were able to arrest a Dangote trailer that was carrying 1.1 Tons, so within the resources available to us, while the criminals are trying to beat us, we are also trying to do the best we can to match up with them”. He said.

According to a survey carried out by Nigeria’s National Bureau of Statistics (NBS) and the Center for Research and Information on Substance Abuse, nearly 15% of the adult population in Nigeria (around 14.3 million people) are into active use of psychoactive drug substances. it’s a rate much higher than the 2016 global average of 5.6% among adults. 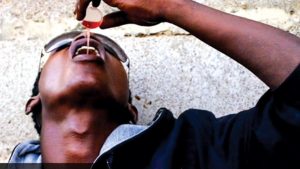 The survey showed the highest levels of drug use were recorded among people aged between 25 to 39, with cannabis being the most widely used drug. Sedatives, heroin, cocaine and the non-medical use of prescription opioids were also noted. The survey excluded the use of tobacco and alcohol.

Since 1990s, stemming the flow of opioid imports has proven particularly difficult for Nigerian authorities. Despite its tough stance, Nigeria’s rising profile in the hard drug business refused to wane over the years. The country has been reported to have played a major role in the movement of hard drugs from South America to European and Asian countries. The country’s streets have not been spared of illegal peddling of drugs as well. Many seizures (of drugs) have been reported on major highways but how is the regulatory agency dealing with this? 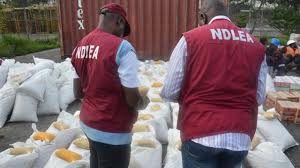 The Chief-of-Staff to the NDLEA Boss explained to Rootstv Nigeria that the Agency has always confiscated vehicles of erring transport companies. He said “what the law provides is that, if a means of transport is found to have conveyed drugs, you seize it. That means of transport are subject to forfeiture after the person using it to convey the drug has been convicted unless the owners’ show there’s no way he was found to have connived. So what usually happens is that for example, the Dangote truck (intercepted for carrying) drugs, the corporate body of Dangote would never have known that the driver was going to use it (the truck) to carry drugs. What they usually do after they’ve loaded the real consignment, they now connive either on the way to ensure that they carry persons carrying the prohibited drugs. Not only drugs alone, but our boys have also been vigilant, they don’t assume and they’ve gotten it right on many occasions.

So if in this particular case, the company is not able to show that they have done due diligence to ensure that the vehicle was not used to carry the drugs of course by the laws, NDLEA will forfeit the vehicle to the Federal Government after the driver has been convicted.

Giving an example of the collaboration, the NDLEA Chairman, Mohammed Abdallah, through his Chief-of-Staff, Olufemi Oloruntoba said, “following a collaboration between Nigeria, Ghana, and India, the influx of drugs, most especially, Tramadol from India into Nigeria.

Source:ROOTSTVNIGERIA
News
Previous article10 Extra Income Businesses You Can Start from Home in 2020
Next article50 Years After Biafra: Is Nigeria on the Verge of Another Civil War?
© Newspaper WordPress Theme by TagDiv